Good hunting opportunities in my area are fading fast. 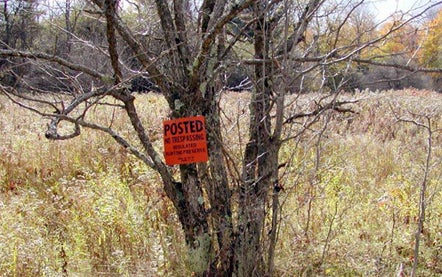 I’ve got problems. Of course, you know that, but I’m not talking about my mental state. I’m talking about my deer hunting prospects for this season. Even if you’ve got all the equipment money can buy and all the skill in the world-which I don’t, not by a long shot, though I do seem to have enough of both to kill a deer every once in a while-you’ve got problems if you don’t have a good place to hunt.

Well, it appears I no longer have a good place to hunt. I used to have several. But over the last couple of years, and especially just recently, they’ve been ruined or lost, one by one. For now, at least, I’m left with a few dregs.

At one of my favorite places, where several bucks predictably parade down a swampy swale and onto a small oak flat, the owner sold part of the land to developers who put up an adorable little colonial right beside my hotspot. The bucks are still there. I checked out their perennial rub lines and scrapes just recently, and I suppose that technically I could still hunt them. But I can’t get excited about shooting deer in someone’s backyard.

Another great spot, 200-plus acres of whitetail and turkey heaven that I had all to myself, just changed hands. The new owner is a very nice guy and has given me permission to continue hunting there. Problem is, he also told the employees of his small construction company that they can hunt there, too. And judging by my last visit, they all took him up on the offer.

Most recently, I lost the home of one of the biggest bucks I’ve ever seen. Toward the end of last season, this deer was making regular visits to an open alfalfa field. By the time I nailed down his pattern, though, the season was over. Nonetheless, I felt I had a good shot at him this year. Turns out, however, that I apparently wasn’t the only person to see this buck, because the field he was visiting borders a busy road. This year, the owner has had so much trouble with hunters traipsing onto his land without permission that he finally threw up his hands and decided, no more hunting … period. And I can hardly blame him.

Now, these are only three of several places I’ve lost in a matter of a couple of years, whether to development, crowded hunting conditions, landowner frustration, or other reasons. If you had told me 10 years ago that I’d lose permission to hunt certain farms in the very remote area where I grew up because those parcels would be leased to nonlocal hunters, I’d have given you directions to the nearest asylum. In fact, you’d have been right.

All of this, of course, points to a growing trend in our sport: More and more hunters have fewer and fewer places to hunt. I’d bet that there are very few of you who haven’t lost one of your favorite spots for one reason or another. The result, it seems, is that more and more hunters are willing to, or having to, pay for the privilege. For most, this means leasing land, but we can hardly ignore the apparently surging popularity of buying land and turning it into a hunting paradise all your own.

Naturally, the pay-to-play trend is more entrenched in some regions than in others. Perhaps to their credit, area hunters have gotten used to the idea. But in other parts of the country, where the trend is fairly new and on the rise, some hunters are having trouble coming to terms with it.

So I’d like to ask you: Is finding a good place to hunt a major issue for you? Are you willing to-or do you already-pay to hunt? Does the pay-to-play trend bother you? I’d like to hear your opinions, which you can send via e-mail to davesplace1@aol.com.