What's a writer to do when his brother stops bumbling? 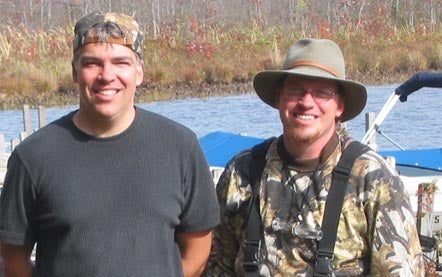 I’m a little upset with my brother Dan. (above left, I’m on the right.)

A few years ago, when he gave me carte blanche to bust on him in this column (very generously, I should note), I envisioned a gold mine-a mother lode of missed shots, botched hunts, boneheaded moves, and bloopers that would make the job of filling this space each week infinitely easier.

If you’re not yet familiar with Dan from previous columns, you should know that his hunting career thus far has been dominated by such spectacular ineptness that he has earned a sort of folk-hero status among friends and family. Much more important, however, is that he has been walking column fodder for me.

Now, don’t get me wrong: I enjoy hunting with Dan for many of the right reasons. He’s a genuinely good guy, a perfectly safe, if bumbling, hunter; and every outing with him is guaranteed free comedy to be enjoyed for the moment-and only used for my own modest personal gain later.

Besides, Dan rather enjoys seeing his name out there in cyberspace, no matter what I say about him. So it’s been a two-way street.

There has, however, been a recent bump in the road.

Though no one who knows him could have imagined it possible, in the last couple of years his general outdoor skills have improved considerably. I can’t remember the last time he nearly flipped the canoe, for example, and it’s been ages since he’s fallen face-first in the marsh trying to walk before getting his boots unstuck from the mud. Really, he’s been giving me very little in this area.

Worse, his hunting and shooting skills are also improving. He seems to be consistently remembering to load his gun, and whereas for many years he couldn’t readily tell a duck from a red-winged blackbird, let alone a cormorant, he now seems to be accurately spotting waterfowl left and right-sometimes before I do. This, of course, puts me at a loss.

But by far the worst of all, and the most unlikely of all, he’s beginning to hit what he shoots at. For as long as I or anyone who’s ever hunted with Dan can remember, even if he didn’t do anything wonderfully boneheaded on a given day, you could always, absolutely, virtually without exception, count on him to miss, often by hilarious margins. Yet, on our last two hunts, he shot twice. The first shot dropped a mallard, the second a Canada goose, both stone dead. Honestly, how am I supposed to write about that?

Now, given that Dan’s name appears at the top of this page, there can be no doubt that he will read it all the way to the bottom. So, if you kind readers don’t mind, I have a little message for him:

_Dan, get with it! Your potential as a (preposterously minor) celebrity in this column is slipping. I need more. If you don’t think you can regain your old form, come over tonight and we can at least bend the barrel on your shotgun. _