Where do you draw the line? 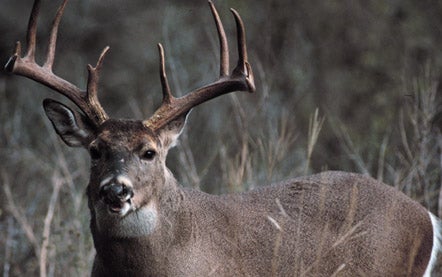 TWO WEEKS AGO, I asked the deer hunters among you, “How big is big?” And your e-mails keep pouring in. So, without further ado, here are more excerpts from your letters on what constitutes a shooter buck, a big buck, and a buck of a lifetime:

When I lived and hunted in West Virginia, the standard we tried to stay with was to take only bucks with antlers at least as wide as the tips of the ears, or about 16 inches of inside spread. After about 10 years of this limitation, I killed a deer that had almost 18 inches of inside spread. It was the largest buck to come off our farm. In the end, it was only about a 110-inch buck. But we still all considered it a wonderful trophy. Trophies vary regionally, and often even within the ranks of hunting buddies. The key is to know your own standards before squeezing the trigger.

Here in Manitoba, few hunters in our district would shoot a 130-class buck or less. As a result, we have a sort of unspoken Quality Deer Management program, but the impact is the same. Several of us saw a 120-class buck last year, and we all agreed that this would likely be next year’s deer. If someone wants to fill a tag on the last day of the season, a doe is often the result.

I also have a friend who seems to take a very nice buck each year. In fact, the first whitetail he ever killed was a 13-point monster that made the Boone and Crockett record book. On the other hand, I have friends who don’t have the quality of deer that I see, and they usually take bucks wearing their first sets of antlers. It took me four years before I killed a deer with antlers, and it was a young 5-point. Since then, I’ve taken six more antlered deer, only one of which carried more than 100 inches of antler. This past bow season, I was lucky enough to harvest a mature 10-point that had a net score of 148 6/8 inches.

These days, I try to pass up bucks that are 2 1/2 years old or younger while hunting in my home state of Ohio. Here, the deer population has reached levels that allow me to be particular. If I’m hunting out-of-state, however, I’ll often take the first antlered deer I see. I guess in any situation, what one would consider a trophy is relative to the size of deer that the area holds, or what size of deer you’ve taken in the past.

I hunt Columbia blacktail deer in Oregon and consider any buck with more than 4 points (on one side) and over 125 B&C; inches to be a big blacktail.

What we kill is what we eat for the winter and summer months, and so I very rarely pass up bucks. Horns don’t eat very well and make an even worse soup. So if the buck I kill has a nice rack, that’s icing on the cake.

I have two racks on my wall, both 10 points, the biggest being about 130 inches and change. Now I’m just looking for something bigger. As long as I can outdo myself, I’m more than happy. The last and biggest buck I shoot will be my buck of a lifetime, but I won’t know which one it is until my lifetime is over.

For mule deer, I consider any buck with 3 or more points to a side to be a big one.

I have no problems with trophy hunters. I envy them the opportunity, and the discipline, to pass over bucks looking for a big one. But, as you said, a trophy is different for each of us, and I was thrilled to get a big 3×3 muley back in 1984.

Here in Iowa, we grow big bucks, and we’re used to them. Six- to 8-pointers are very common, and a really nice symmetrical 8-pointer can easily push 140 gross points. With the deer here, you can be picky if you want. Three of the last five years, I’ve shot bucks that had 9 points or better and all would score over 130 points. These are considered average around here. My new goal is to harvest a 10-point buck that will go 150 or better. In the meantime, I’ll probably pass on smaller bucks and shoot a fat doe instead.

I have an uncle that comes up north every season to hunt with us. It irritates me to no end that each year he shoots the first 1 1/2- to 2 1/2-year-old buck he sees. No one else in camp does this. The rest of us pass up three to five bucks in that age class every year, and one or two of us will take one ranging from age 3 1/2 and up. I believe in QDM and that if it’s practiced properly, it can improve the overall health of the deer herd. If more people would practice this, we’d have more quality deer and a healthier herd. I think the guys who say QDM doesn’t work haven’t had an opportunity to see it work and are just plain too lazy and unconcerned with the overall health of the deer herd to practice it. But I’ll bet they’re the first ones complaining to the local DNR about the health and size of the deer herd.

Personally, I’ll shoot a doe and let smaller bucks walk. But I don’t take anything away from anyone else’s hunt. If you shoot a small deer, I’m happy for you. I don’t think it’s very sportsmanlike to look down on other hunters because they kill deer you would pass up. There’s already too much of that sort of thing. Congratulate people on their achievement, even if you would have done things differently.