The camo socks, wrong-gauge shells, and beer-can lures that make the holidays ... special. 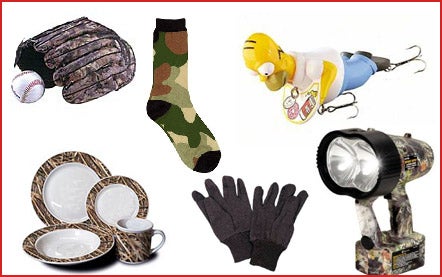 The holidays can be tough on sportsmen. On the one hand, many of our loved ones are thoughtful enough to get us something they think is pertinent to our hunting or fishing. On the other, they commonly have no idea what’s pertinent to our hunting and fishing. So we wind up with a lot of camouflage socks, neckties embroidered with fly patterns, lures made of miniature Budweiser cans, and black-velvet paintings, mugs, and decals of outdoor scenes.

Until recently, gloves were a perennial gift for me. Year after year, I could count on getting a pair, invariably either the sort you’d use to remove a stump or the type you’d wear on an Arctic expedition. I have a stack of them that I keep handy in my closet just in case I decide to take up stump removal more seriously or move to Greenland.

Then there are the camouflage flashlights, which of course make no sense-although I can’t really blame nonhunters for buying these as gifts, given the number of hunters who buy them for themselves. Once I received a box of shells whose gauge didn’t match any of my shotguns. And I got a T-shirt with a picture of a lure and the words, BITE ME! in large block letters, which the Salvation Army later refused to take. Of course, it’s the thought that counts, even if you need an extra closet to store all the junk you’ll never use but haven’t the heart to get rid of.

With my closet already full, however, I’ve recently taken to leaving subtle hints for potential gift-givers. For example, I’ve been scattering sporting-goods catalogs around the house where I know they’ll be seen, such as in the refrigerator or duct-taped to the bathroom mirror, where I leave them open to a page with certain items circled twice in indelible black marker.

It worked out almost perfectly this year. My wife, Robin, got me a waterproof fleece pullover, a sling with matching swivels that fit my new rifle perfectly, a recoil pad for my turkey gun, and a new turkey hunting vest to replace my old tattered one.

I say “almost perfectly” because she also got me a deer sleigh, to be used should I need to drag a deer out of the woods. If you read my last column, however, you know that I haven’t had to drag a deer out of the woods in two years. You also know that I’ve been getting a little grief about it lately. So, while I did originally want the deer sleigh, I probably should have known that it might lead to more wisecracks:

“It just came to me one day while I was reaching into the refrigerator,” Robin said.

“You know,” she said with a laugh, “these sleighs came in two sizes: small and large. I figured you’d only need a small one. And I kept the receipt, just in case you want to exchange it for something-oh, how should I put it … a little more practical.”