Has life ever beat you silly with a fishing rod? 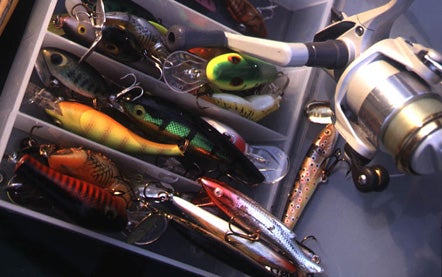 Last year I sprung for a top-quality ultralight spinning rod, which my brother accidentally snapped in two a couple of weeks ago. He said, “Now there’s a good argument for not buying an expensive rod.” I told him it was a better argument for not letting him touch my stuff, but the truth is, at least in my case, he may have a point. I have terrible luck with higher-end spinning rods. If I pay anything over $50, the rod is as good as busted.

But among the many busted rods, one stands out.

I’d had my eye on this fancy graphite spinning rod for weeks. It was a summer between college semesters, and I was working at a hotel cleaning rooms for about 3 cents an hour. Finally, about halfway through the summer, I’d scrubbed enough toilets to buy it. I paid $60–a small fortune for me then–but it was worth it. I was giddy walking out of the store.

Later that week, my brother Greg, his friend Pierce, and I had plans to drive Greg’s truck to the Hudson River to christen my new rod with some bass fishing. Now, the problem with owning a truck is that there are always half a dozen people who want you to haul their dead refrigerators to the dump…or some such. Naturally, one of them showed up as we were getting ready to go. It was our neighbor Huss and one of his buddies. Greg told them to throw the refrigerator in the back of the truck and we’d drop it off at the dump on our way home from fishing.

Just as we arrived at the fishing spot, I realized with a sudden panic where my new rod was. I bolted out of the truck, looked into the bed, and yelled, “Nooooo!” There it was, half buried under Huss’ dead fridge. I retrieved it to find the top four eyelets (which we always called “eyes”) flattened and dangling. Greg and Pierce casually reached into the bed of the truck and grabbed their rods, neither of which seemed damaged in the least. Then Pierce, noticing the sick look on my face, asked me what happened.

“My eyes are all busted to hell!” I yelled.

“What are you talking about?” Pierce said. I was in too much of a froth to consider that Pierce had done very little fishing and probably had no idea what I was talking about.

“Look at my eyes!” I said, holding the rod up between his face and mine. “Look! How many eyes do I have?”

“And how many eyes should you have, Dave?”

Pierce raised an eyebrow and backed away.

Meanwhile, my brother was pointing at my rod and laughing hysterically.

“Ouch!” he said between laughs. “You got housed.” (I have no idea what today’s popular slang is for when life beats you silly, but at the time, it was housed.)

“Huss housed you.” Greg laughed harder. “You were housed by Huss. Ouch!” And that became the tag line for the day: “Housed by Huss.” I heard it a dozen times before we even started fishing.

Down on the river, Greg was getting a big bang out of my pathetic attempts to fish with a rod that had only two functional eyes. He also took the opportunity to extol the virtues of his less-expensive but tried-and-true fiberglass rod. After all, he argued, it too had been in the bed of the truck with Huss’ fridge, but had withstood the thrashing. Having made his point, he slung a crankbait over the water, started retrieving, and set the hook on the first fish of the day.

“Oh baby,” he said. “Yup…oh yeah…this is a good one.” He leaned back against the fish. His rod bent into a tight arc. There was a sort of crackling noise–and his rod exploded into three pieces. The fish broke off, and Greg stood there stupidly.