The engine is fine-the problem is what I leave on the roof. 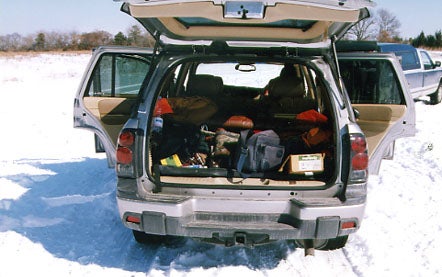 I was thinking I’d tie some flies today, but I can’t seem to locate my vise. No big deal. Nothing to get upset about.

Truth is, I don’t place much value on my possessions. It’s not that I’m philosophically any less materialistic than the average person. It’s just that over the years I’ve grown accustomed to the fact that when it comes to my possessions, I rarely possess them for very long-because I’m an absentminded person who tends to lose things.

My wife has a word for this side of me.

Anyway, there’s nothing very unique about my situation. I typically mislay the usual suspects: pens, flashlights, my Social Security card; choke tubes, rifle clips, my truck. And they often eventually show up in the usual places: the glove box, a pocket, on a different logging road in a thousand acres of public land. But this is just part of the daily routine of any type C or D person.

What I do seem to have a special gift for, however, is putting things (other than coffee cups) on top of my vehicle and driving away. These are often quite large or expensive things. Things even most absentminded people would notice-like a Pentax K-1000 35mm camera, a pair of Cabela’s 3mm neoprene boot-foot waders, and an Orvis Trident 4-weight fly rod and Battenkill reel.

In fact, were it not for the kindness (or at least the awareness) of strangers, I might have an empty spot in my gun cabinet. A number of years ago, at the end of a morning turkey hunt, I unloaded my shotgun, took off my vest, got in my car, and drove into the town where I planned to stop for breakfast on my way home. At the only intersection, two cars beeped at me as they idled by. I smiled and waved. It being a small, rural town like the one I grew up in, I assumed they were just being friendly.

The man driving the next car, however, was motioning frantically, pointing toward the sky. I waved to him, too. It being a small, rural town like the one I grew up in, I assumed he was drunk. Then I pulled into the diner parking lot, went inside, and was about halfway through my corned-beef hash when the lady behind the counter spoke up.

Now, you know how every once in a while there’s a public announcement that some idiot has left his lights on in the parking lot? And as you bumble out of your seat and head for the door, how there’s really no hiding who the idiot is? Well, that’s enough to leave you red in the face. What’s more embarrassing is when the person making the announcement says, “Hey! Whoever’s driving a brown Cutlass, there’s a shotgun on top of your car.”

Naturally, for any number of reasons, I never wanted that to happen again. And since then-with the help of my wife and a sign taped to the steering wheel that reads simply, MORON, an affectionate reminder that I may not be the sharpest knife in the drawer and should therefore check the top of the car-I’ve gotten quite a lot better. Still, if you find yourself driving behind me, I have a couple of recommendations: Keep your distance, for safety’s sake, and keep an eye out along the side of the road for free, if slightly damaged, sporting equipment.