Flyfishing and baseball have more in common than just flies and strikes. 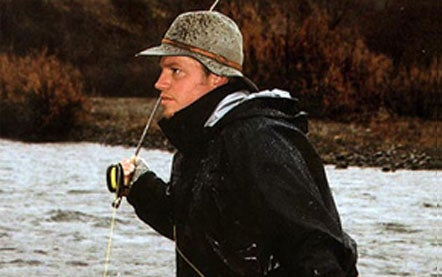 My dad watches a lot of baseball. Actually, he watches the first few innings of a lot of baseball games, then falls into a sleep just deep enough that his mouth drops open and lets out a quiet snore, yet shallow enough that he vaguely detects the game’s highlights as well as anyone’s trying to change the channel. In any case, when I was a kid, I’d try to change the channel, and he’d wake up and say: “What? Wait. Hey. I’m watching that.”

“I’m sleeping and watching it.”

“How can you watch baseball? It’s so slow. How can you sit there and listen to some guy shouting, “Ball one…ball two…strike one…ball three?”

By the same token, before I started flyfishing, I’d occasionally see flyfishermen sitting on the grassy banks of trout streams or standing in the middle of quiet pools just gazing out over the water, apparently waiting for something to happen. This seemed to me about as sensible as watching a baseball game. Why flyfish? I figured. Why sit around waiting for a fish to rise? Why use such patently inefficient equipment when you could catch twice as many fish in half the time with spinning gear?

At the time, of course, I was young, in a hurry, and unable to appreciate one of the fundamental pleasures of baseball, flyfishing, and life. Now, I watch at least as many baseball games as my dad does, and about 98 percent of my trout fishing is done with a fly rod.

It’s a poetic coincidence that both the trout and baseball seasons run from April to October and are both essentially summertime sports. A June afternoon is long and languid and lazy–perfectly suited to the monotone drone of an announcer’s voice and the sleepy rhythm of the pitch count, or the constant quiet rush of a river and the somnolent sounds of swallows.

A baseball game holds the promise of an afternoon nap. A day of flyfishing, if done right, involves some time reclining on the bank, lazily watching and listening. If both activities offer an exciting moment or two, they’re well balanced by long stretches of ease: watching a center fielder drift under a lazy fly ball, or eyeing a sunlit mayfly climbing toward the trees; nodding off to the steady crowd noise, or zoning out to the swish of a fly line.

When I was a kid, I understood perfectly that both baseball and flyfishing are slow. What I didn’t get–and what I get now–is that they are gloriously slow, a drowsy summertime slowness, the wonderful indulgence of more or less doing nothing.

As I write this, tomorrow is April 1. I’ve been waiting all winter for that. What other day of the year marks the beginning of two things so brilliant as baseball and flyfishing?