We're fishing fools, and it makes us feel bad-and good. 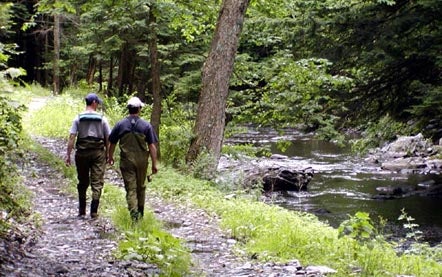 My friends Paulie and George and I are smart enough to know we’re stupid. We admit as much every time we get together to fish. At the end of each trip, we look at each other, bleary-eyed, and say, “We’re so stupid.” Problem is, we don’t seem to be smart enough to change our moronic ways.

Trip after trip, we run ourselves ragged by fishing (and goofing off) too much and sleeping too little. Afterward, we promise ourselves we won’t do it on our next outing. Then we do it again. The solution is simple, of course, and well within even our grasp academically. But as the saying goes, stupid is as stupid does.

Take our last fishing trip together. George drove four hours to get to my house, arriving at about eight o’clock on Friday night. We should have shaken hands, said hello, and gone straight to bed. But we hadn’t seen each other in a while, so we stayed up talking until 1 A.M. After an hour’s sleep, we woke up and drove three hours to the stream in time for first light and the best fishing. There, we met Paulie, who’d woken up at 3 A.M. to meet us.

Already exhausted, we fished for 10 hours without a break. When we checked into our hotel at around three in the afternoon, I was too tired to think. The lady at the front desk asked me my phone number, and I was completely stumped. If it hadn’t been for the business card I managed to fish out of my wallet, I’d still be there trying to think of it.

In the hotel room, we fell onto the beds almost involuntarily. Of course, we should have gone straight to sleep. Instead, we started to chitchat about the day’s fishing, and before long, someone broke out the cards and we played poker until 1 A.M. Then we woke up at five and fished for another 10 hours straight.

By the end of the second day, no longer able to stand, we were lying down in the fishermen’s parking lot, groaning, and facing a long drive home.

“Why do we do this to ourselves?” Paulie asked.

Well, we are idiots. There really isn’t any denying that. But I think there’s another reason why we do it. George and Paulie and I started fishing together in college, when we were young and full of beans. At the time, fishing all day and goofing off all night was routine; we could do it day after day, even for weeks at a time. Now, when we’re in our mid-30s, the beans are drying up-we can barely survive a weekend of it.

But the point is: We do survive a weekend of it. It’s painful. Our bodies ache. We make involuntary moaning sounds. Our eyelids feel like they have 8-ounce bell sinkers hanging from them. Our brains are mush. But for a few weekends out of the year, at least, we’re back in college, fishing all day and goofing off all night.

No doubt, the day will come when even a weekend of it will be more than we can bear. But until then, crazy as it seems, it’s worth it.