When a squeaky backyard grill becomes a locator call, what's a turkey hunter to do? 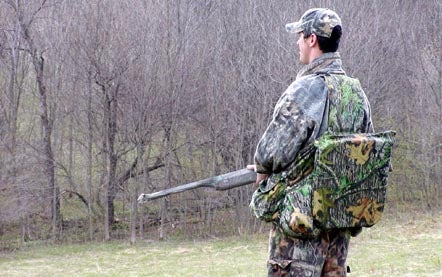 I have a dilemma.

There’s a large tract of woods behind my house, and a parade of critters visits our backyard regularly. Bunnies are ubiquitous, the coons and possums frequent, and on occasional nights a pair of gray foxes prance beneath the floodlights that beam off our deck. The daily travels of a small flock of hen turkeys bring them ambling single-file across the yard each fall. Every November, a pair of doe deer set up shop to escape the overtures of rutting bucks. They bed down in the middle of the lawn, in the middle of the day, with their two or three fawns. Ruffed grouse are perennially clucking and scratching in the brushy borders of our property, and right now, on any given evening, you can walk out onto the deck and hear the peenting and twittering and warbling of a dozen or more amorous woodcock.

Of course, these critters don’t actually live in our backyard but in the surrounding woods, where they are unquestionably fair game. They are totally wild animals in their natural habitat and commonly hunted by other people. But because they visit my yard so often, it hardly even occurs to me to hunt them. They’ve become more like neighbors than quarry.

Until now, however, none of them have openly taunted me. A few weeks ago, I stepped out on the deck before dusk and put some chicken on the grill. As I closed the grill’s rickety lid, it made its usual loud, creaking squeak, which was immediately answered by a booming gobble. This was unusual. Though I sometimes see hens in the yard during spring, the gobblers typically roost farther back in the woods. I occasionally hear them gobbling in the distance on calm, quiet early mornings and evenings, but never this close.

I opened and closed the lid again, just to get a better sense of where the bird was. The lid squealed, the bird gobbled, and I figured he was roosted a few hundred yards or so into the woods, almost straight back behind the house. Then just for the heck of it, I opened and closed the lid in a quick series of six or seven squeaks, and the tom cut me off with a double-gobble.

Of course, turkey season is right around the corner here, so the question of whether this bird was far enough in the woods for me to hunt with a clear conscience did pop into my mind. The fact was, the tom had not visited the backyard and wasn’t likely to. So technically, I shouldn’t consider him a neighbor. Still, I decided he was in the neighborhood-and that I’d leave him alone.

At about 5:30 the next morning, however, another booming gobble rudely awakened me from my peaceful dreams. I got up and closed the window, which was cracked to let in a little fresh air. But I could still hear him. I tossed and turned and tried to ignore him, but I couldn’t get back to sleep. Apparently, as a turkey hunter, I can’t sleep when a turkey is gobbling, even if I can only hear him faintly.

Later that morning, taking a little break from work, I stepped into the yard to do a little fly casting, and sure enough, there he was, standing in the field on the other side of our hedgerow, gobbling his head off. That afternoon, I opened the back door to let the cats in, and he gobbled at me from the woods. And again, that evening, he sounded off every time I closed the lid of the grill.

As it stands, this bird has roused me at 5:30 every morning for four mornings straight and counting. It could be that I’m imagining things because I’m completely exhausted, but it seems that every time I go behind the house, open a door or window, cook dinner, or try to sleep, this bird gobbles at me. And the more I hear it, the more I detect a certain arrogance in his gobbles-a rudeness, even a challenge, all directed squarely at me.

If I didn’t know better, I’d say he was calling me out. But for now, I do know better. Though tempted, I still have no immediate plans to hunt him this spring. Then again, if it gets late in the season, my tag iss unfilled, and he’s still waking me up at 5:30 and gobbling at me every time I turn around, I may have to reconsider. It’s true, I like living in close proximity to wild critters, having them visit our yard and the nearby woods. But on the other hand, and I think any homeowner would agree, there is such a thing as having one too many neighbors.