I cursed the river and it paid me back in trout. 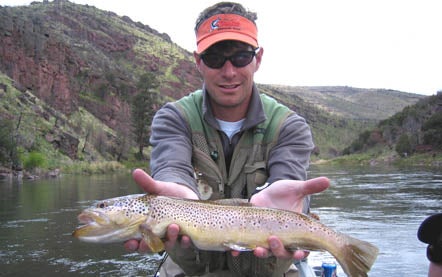 Given its place in the history and literature of flyfishing-and its reputation as a blue-ribbon trout stream-I really shouldn’t curse the Battenkill River, which springs from Vermont’s Green Mountains and threads eastward around quaint country houses, through prim pastoral calendar-scapes, over the Vermont-New York border, into forgotten farmland, and past a string of sleepy little towns, until it finally dumps into the Hudson River, about 25 minutes from my house.

But what can I say: I feel cheated.

The Battenkill’s renown for its abundant brook trout and big native browns was one of the reasons I moved to this part of New York state. But what I didn’t know then, and didn’t learn until I’d already bought a house and got comfy, was that the river’s famous rep was a tad outdated.

It’s my own fault, in part. Had I bothered to read any of the many articles written about the river in the last decade or so, I’m sure I’d have noticed that most of them were entitled: “What’s Wrong With the Battenkill?”

But I stupidly went on reputation alone, and what it’s gotten me is enough disappointment and frustration that by the end of each fishing season, I’ve convinced myself not to go back. But reputation is a powerful thing. And each spring about this time of year, with the evenings lingering warmer, the Battenkill’s most celebrated mayfly hatch gets into my head, and though I should know better, I make my way to the river.

There, almost invariably, I find the same thing: swarms of Hendrickson spinners flying steadily upstream, dancing up and down through slanted sunlight, mating midair, falling to the surface, gliding lifelessly downriver-and not a single fish rising to them. Though the Battenkill does still hold some very big brown trout, they typically hunt for bigger meals and rarely take insects at the surface.

For a flyfisherman, it’s maddening. And it was all playing out again, as usual, just this past week, as I sat streamside on a fallen log, staring into the constant cloud of mayflies in front of me, watching swallows and dragonflies pick the bugs off one by one, and waiting for a ripple to show on the dead-still water.

I’d already been waiting an hour before the bugs showed up. I waited another hour as they swarmed. I waited a third as they began to peter out. And with about a half hour of light left in the sky, I snapped.

Now, I don’t normally swear. It’s not that I have any particular aversion to profanity. It’s just not something I’ve ever been able to do with any skill or panache. Truth be known, I’ve always kind of envied people who do it well. Like people who take easily to foreign languages, some folks just have a tremendous talent for swearing-a natural facility in which the entire lexicon and all its nuances seem to be at their immediate disposal, and complex phrases consisting of nothing but curse words roll off their tongues with confidence and ease.

My rare attempts, on the other hand, are usually halted by hesitation and left kind of limp. But this time, with bugs all over the water and not one fish rising, I began a spontaneous string of curse words, directed at the river, that not only got off to a solid start but went on fluidly and with genuine gusto for a full two minutes and ended with a creative flourish.

And when I was done, a single fish rose in a shallow eddy below me. I wasn’t impressed, though. I thought, Finally. At least I’ll have one fish to cast to tonight. So I cast and saw my Hendrickson spinner disappear into the center of a sipping rise. Then all hell broke loose.

Some 10 or 15 minutes later, I lifted a 5-pound brown-the biggest resident brown trout I’ve ever caught, and may ever catch, with a dry fly.

Like I said, I shouldn’t curse the Battenkill. But if this is what it gets me, I’ll be spending much of this season on its bank, practicing my profanity.