Tipping the cosmic balance of hunting and fishing. 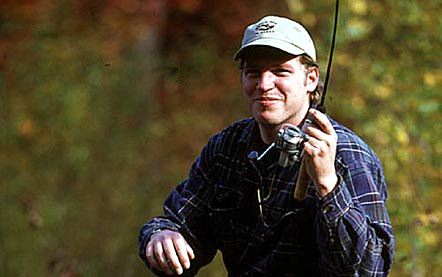 Generally speaking, I’m not a superstitious person. I’m not afraid of walking under ladders or on top of cracks in sidewalks. I don’t carry a rabbit’s foot. And, in fact, I own a black cat (which, come to think of it, could explain a lot). Anyway, that said, a couple of years ago, in a moment of weakness, I did pick up an unusual habit that on some subconscious level I sort of believed might help control my luck. But I’m done with it now. Just recently, I reassessed the whole thing from a strictly logical standpoint and have decided to put an end to the nonsense.

It started two years ago during the seventh game of the nail-biting 2003 American League Championship Series between the Boston Red Sox and the New York Yankees. After Pedro Martinez gave up the game-tying bloop double to Jorge Posada, things were looking up for my team. On the commercial break, with the game tied, I had just stood up, stretched my legs, and sat back down when it suddenly occurred to me that doing so might have changed the cosmic balance, turning luck’s tide toward the Sox. So I got up and sat back down again-to even things out, of course. From then on, I didn’t take one sip of my drink, but two. Between innings, I opened the refrigerator door not once but twice … and so on until Aaron “Bleeping” Boone hit Tim Wakefield’s hanging knuckleball into the left-field seats, sending the Yanks to the World Series.

It seems silly, of course, but I’ve done things in twos during every Yankee game since. What’s more, the same little quirk has crept into my hunting and fishing. Now, it’s gotten to the point where I envy fellow sportsmen who simply wear a lucky hat or tote a lucky rod or rifle-which is a heck of a lot easier than doing everything twice. For example, when calling to turkeys, I never make one series of calls at time, but always two; when casting to rising trout, I make two casts, wait a few seconds, and cast twice more.

I admit, there are some inherent problems with this system when it comes to hunting and fishing. In the outdoors it’s just too impractical to do some things twice, the way you can when you’re watching a baseball game. I don’t, for example, climb into my tree stand at dawn, then climb down and back up. And the fact that I can’t do everything twice has often left me wondering where my luck actually lies.

The other day, I was discussing this with my friend and colleague Phil Bourjaily, who said, “You know, Dave, superstitions do work. But they only work until they stop working.”

This made a good deal of sense, so I thought it over. Since the day I started doing everything twice, the Yankees lost the 2003 World Series to the Marlins. In 2004, they became the only team in history to lose the last four games of a seven-game series, and the Red Sox, no less, went on to become world champs for the first time since 1918, breaking the curse of the Bambino. Hmm.

Maybe worse-it’s a tough call-I have not killed a deer since then. And though I was fairly lucky in regard to turkey hunting and fishing last year, my luck so far this spring has been pretty lousy.

After considering all of that I realized that my little system was no longer working. So I brought all my best logic to bear on the superstition itself, and of course, decided that the whole thing is completely ridiculous.

Obviously, if I do everything twice, I have no power to change my luck but only to maintain it. Now it’s crystal clear: I need to do some things just once to upset the cosmic balance and turn luck’s tide back my way.

Then I can start doing things twice again.

Then I can start doing things twice again.