Leaky waders almost turned me into an exhibitionist. 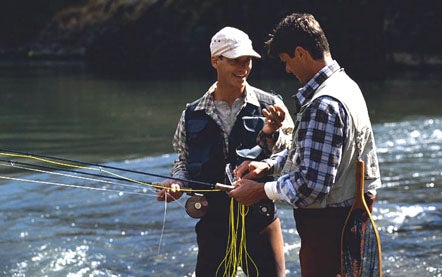 Every pair of lightweight waders I’ve ever owned has eventually sprung a leak-or multiple leaks. I’ve thrown out several pairs and have three others hanging in my garage, all of which let in water to one degree or another. Naturally, I wanted to bring the pair that let in the least on my fishing trip this past weekend, but I couldn’t remember which was which. So I chose randomly, threw them in the truck, and drove three hours to meet my friend Paulie.

As soon as we stepped into the river I knew I’d chosen poorly. Four hours later, with the morning’s fishing done, I took off my waders and poured a half gallon of water out of each stocking foot. Worse, I was absolutely soaked from the waist down.

Stupidly, I hadn’t planned for this. I didn’t take my wallet out of my pants beforehand like I should have, so it and all of its contents were soaked. And since it was a short trip, I had only packed one other pair of pants. When we returned to the river after lunch, I couldn’t bear the thought of putting all that wet clothing back on and reluctantly decided it would be easier not to wear it-or anything else-under my waders. For reasons I don’t understand, Paulie referred to this as “going commando,” and took to calling me “Commando Dave” for the rest of the trip.

Anyway, this made for an unusual problem when we finished our evening fishing and returned to the jam-packed parking lot where a dozen or so anglers were all putting their gear away and, of course, taking their waders off. My truck was parked right in the middle of them all, and although it was dark, there were flashlight beams shooting in all sorts of random directions, momentarily highlighting all sorts of random things, which made me a tad shy about removing my waders.

Meanwhile, Paulie was unlacing his wading shoes when the chronic crick in his back flared.

We’ve been through this before.

“C’mon, Paulie,” I said. “Not with all these people around.”

“Oh, all right,” I finally agreed, positioning myself behind him to help straighten him out. Then, as we usually do when this happens, he lay down in the bed of his truck, and I took off his wading shoes and waders. The onlookers were at least kind enough not to laugh out loud.

I happened to mention to Paulie that my back was kind of sore, too-not with any eventuality in mind but just to make sympathetic conversation.

“Sorry, Commando Dave,” he shot back, “but you’re going to have to take off your own waders.”

Anyway, I did eventually, in the cab of my truck, which, by the way, doesn’t afford a lot of room for such things. After the next morning’s fishing, I was back in the same parking lot with the same problem. This time, though, the owners of the other vehicles were apparently all fishing. There seemed to be no one around, so I decided to risk it.

I’d just unbuckled my shoulder straps when I heard footsteps. A young and attractive woman rounded the corner, and I quickly grabbed my waders at the waist.

I was a little confused and shocked by the question at first and almost answered, “We never made out!”

But Paulie chimed in. “Not bad. We caught a few.”

She told us her name, and Paulie said, “I’m Paul and this is Commando Dave.”

“Nobody really calls me that,” I said.

“It’s a sort-of nickname he picked up recently,” Paulie explained. “I can’t remember why.”

She looked at me a little strangely.

“Say, those are nice waders you’ve got,” Paulie told her. “Do you like them? They don’t leak, do they?”

“Well, Commando Dave’s do. He’s standing in a gallon of water right now.”

She looked at me more strangely.

“Hey, Dave, why don’t you take those soaking-wet waders off? You can’t be comfortable in them.”

Finally, the woman changed the subject, asking us where the fish had been rising and what they were taking. We told her and she left. Once she got out of hearing range, Paulie burst into hysterics.