I Need a Bass Vacation!

The action in your local pond may be slow, but we found five spots where the largemouths are hungry, abundant-and big. Time to hit the road. 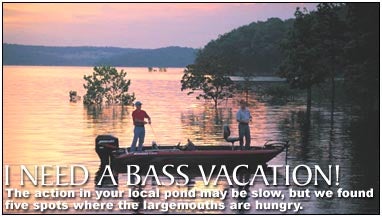 There are largemouths everywhere. They inhabit almost every pond, lake, reservoir, and river in the continental United States. In fact, there are probably bass within a quarter mile of your front door. So why would you spend valuable vacation days traveling to distant bass water in August? Because chances are your home waters, even when not suffering from summer doldrums, don’t produce 50-fish outings, the possibilities of genuine 20-pounders, or the opportunity to cast in the shadows of the country’s top professional anglers. The following destinations do.

Now, would you really rather stay home and mow the yard?

**1. The Mississippi River: Fish Like a Pro **The Bassmasters Classic, a cross between a circus and the Super Bowl is, appropriately, headed to New Orleans. Unless you’re one of the 61 pros competing for a title said to be worth more than $1 million in residual earnings, this year’s Classic offers a perfect chance for a bassing vacation you won’t soon forget.

Classic XXXIII, August 1Â¿Â¿Â¿3, will be held on the Mississippi Delta, a network of tide-influenced canals, cuts, and swamps fringed with tules and sawgrass. The nexuses of bass activity are near the town of Des Allemands, throughout Bayou Black, and around Venice, where the Mississippi River has its great smashup with the Gulf of Mexico. Access to the Delta, the continent’s largest warmwater estuary, is in Venice, about an hour and a half from the Big Easy and less than a mile from incredible fishing grounds. To situate yourself smack in the middle of the action, book a cabin at the Venice Marina.

In the stained water, the pros will be tossing heavy jigs with rattles and flipping with so-called creature baits (e.g. the Zoom Brush Hog) around mats of milfoil, hydrilla, and hyacinths. You’re best off following their lead.

For the first time, the Classic ends on a Sunday in an effort to boost attendance and accompanying revelry. Weigh-ins will be held at the New Orleans Arena, and throughout the tournament the Superdome will be home to the Classic Outdoor Show, a cavalcade of boats, motors, and tackle.

On the Water: The bass eat crabs in the brackish Delta, so fish with black, blue, and purple jigs, or a combination thereof. Go with rattle jigs, too, in the off-colored water.

**2. Lake Fork: Lunker Hunt **When it comes to largemouth bass, you don’t mess with Texas, particularly the bruisers in Lake Fork. Evidence? It’s the former home of the 18.18-pound Texas record and three-quarters of the state’s 50 fish over 15 pounds. Although much of the standing timber has diminished with time, a deathblow for most bass fisheries, strict slot limits, along with plentiful threadfin shad populations, have helped Fork keeps its reputation as a hawg pit.

“You take a lake 20 years old anywhere in the U.S., and it doesn’t produce like this one,” says guide Charlie Hodgson, who notes that a 9-pound catch is a daily occurrence somewhere on the 27,000-acre reservoir 100 miles east of Dallas.

On the Water: Work watermelon-colored 4-inch French Fries, Centipedes, and Ring Fries on Carolina rigs, Hodgson’s choices for heifers 70 percent of the time.

Lodging: **Lake View Lodge, Marina and RV Park (800-473-5110; www.texs.com/lvl). **3. Cayuga Lake: A Yankee Mixed Bag On a lake where sailboats and floating research labs from nearby Cornell University are more typical than bass boats, Cayuga’s plenitude of largemouths and ssmallmouths might be something of a surprise for the Finger Lakes region. But a fishing rig is becoming ever more appropriate.

If anything, largemouths-seemingly something of a Yankee oddity-are proliferating throughout Cayuga, popping up in the last few years around the docks within a few miles of Ithaca, at the lake’s south end. Find them by skipping tubes around pilings and swim platforms.

For deep-water smallmouths, try the sharp break off the yacht club on the west shore. Well to the north, up from Sheldrake Point, the shallow weeds where largemouths dominate is the place to toss a 1-ounce jig-and-pig to puncture the mat of vegetation.

On the Water: Four-inch worms and tubes are more productive than 7- and 8-inch plastics. So, too, are shades of silver and white in the often frighteningly clear water.

4. Lake Dixon: The Little Lake That Could While Lake Castaic may get all the attention in California as the place for giant bass, tiny Lake Dixon (70 acres) in Escondido has been making lots of noise recently (see “Largemouth Record Almost Broken,” page 17). This past May, local Jed Dickerson caught and released a 21.7-pound largemouth. The fish is the fourth-largest bass ever landed and came just two weeks after another angler boated a 19-pounder. After Dickerson landed his beast, he told a reporter, “I know there are bigger bass in this lake.” Time to get in on the action.

On the Water: Dickerson spotted his big fish and then made repeated casts to it with an 8-inch Mission Fish, a swimming trout plug. Whatever you throw, make sure it’s big, real big.

**Local Guide: **There are no guides that regularly work the lake, but for fishing information call the Dixon Lake Ranger Station (760-839-4680).