Survival lessons in the concrete jungle. 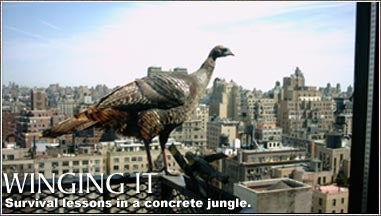 As editors of a magazine dedicated to hunting and fishing, almost everyone at Field & Stream has been asked how they survive in New York City. There is, after all, hardly any wildlife to speak of. While a few staff members live in the leafy suburbs of New York and New Jersey, the rest of us do our best to connect with the natural world within the concrete confines of Manhattan (something editors found much easier back when the magazine moved to the city in 1898).

I live four blocks from the Hudson River and occasionally walk to its banks and cast for striped bass. I don’t always land a fish (once I hooked a submerged garbage can that fought like one would expect a garbage can to fight until I broke it off), but the hope of a strike is as real as if I were in the surf at Cape Cod. I’ve also flyfished in Central Park’s numerous ponds, where stunted bass and sunfish will hit a popper with a ferocity that belies their 5 inches of length.

This magazine’s Editor, Sid Evans, enjoys nothing more than hopping a boat and casting for stripers and blues just a few hundred yards from the runways of JFK airport. Anthony Licata, a senior editor and avid hunter, often leaves the city to pursue deer and turkeys in the Poconos of Pennsylvania but returns to Brooklyn to host wild-game cookouts for his friends in his tiny backyard.

So, when a wild turkey decided to stop over in New York City this spring, the staff responded with delight. It was the first time in memory a turkey had been spotted in Manhattan. The hen chose to roost on the 11th-floor balcony of Art Lindenauer’s apartment on the Upper West Side. “The thing scared me to death,” the retired chemical engineer told the New York Times. Lindenauer and the rest of New York eventually warmed up to the bird, which was also seen roosting in Greenwich Village and Chelsea. In fact, in a city where bumping into Cameron Diaz at Starbucks is not unheard of, the turkey’s appearance created quite a stir. There was even a splashy photo and a lengthy story on the first page of the Times’ Metro Section.

By June, the turkey had winged to greener pastures, but during her brief visit it was nice for the editors of this magazine to know we had a kindred spirit just a few blocks from the offices-a bird that was most happy in the wild but decided, if only for a while, to enjoy the view.