This lodge on Cost Rica's Pacific coast is where men go to tangle with fish that fight dirty. 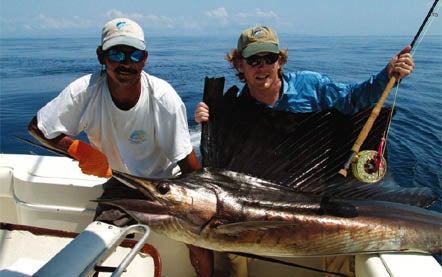 You know that you are fish obsessed-or just plain loco-if, in the middle of a perfectly good day, you strip down to your boxers, don a snorkel and fins, and plunge into the Pacific Ocean 10 miles offshore where the seafloor is 1,000 feet beneath you. In my case, I was obsessed with the idea of seeing a free-swimming sailfish. And I did. Fifteen minutes into my dip, I spotted a sail 40 feet below me using its eponymous dorsal fin to corral a school of sardines. As the ball of bait tightened, the sail, which was lit up like a neon sign, slashed at the silver mass with its bill, knocking three or four fish silly, and then nonchalantly picked them off as they tumbled downward.

When I finally popped up to get my bearings, the boat captain was pointing beyond me with an urgent look and yelling “Big, brown feesh!” It took no further convincing for me to get back in the boat and start catching fish again, which is not a hard thing to do if you’re based out of Crocodile Bay Lodge. And catching fish-despite my fleeting obsession to swim with them-was the real reason I was here.

The reports started leaking out of Croc Bay, located in the southwest corner of Costa Rica in the town of Puerto JimÂ¿Â¿nez, not long after it opened-a swank lodge run with military precision; talented captains with dependable boats; an untapped sail fishery; scads of roosterfish with an inborn hostility to live bait and popping plugs. Fishing lodges in Central America can go south as quickly as it takes a swig of bad water to ruin a trip, but when Mike Laptew, a trusted friend and a part-time shill for the lodge, swore it was all true, I booked a flight.

To my delight, we were fishing 45 minutes after the puddle jumper touched down in Puerto JimÂ¿Â¿nez. At the lodge we dropped our bags, skipped the fruity welcome cocktail, and hopped a 17-foot center-console for a day of inshore fishing.

Our guide, Cory Craig, a snowbird from Canada, fit the part. A gold circle hook hung from a leather thong tight around his neck, and a large roosterfish tattoo decorated his calf. “They get in your blood,” he said, referring to the roosters, the other marquee fish at Crocodile Bay.

Roosterfish are named for their dainty, comblike dorsal fin, but they’re no chickens. Rather, they are the equivalent of a bar-fighting thug who would kick your teeth in and thump your noggin with a boot heel for good measure. They frequent the surf zone, often swimming just outside of breaking waves. To catch the roosters, we trolled live sardines on the edge of massive swells that detonated in a thunder of white water as they hit the reef.

After we warmed up by catching numerous jack crevalles, a rooster took the bait. I was worried I might have hooked a pacifist until it sucker-punched me, suddenly exploding with enough speed and power to cause my bare feet to slide across the slick deck. Eventually, I wore it down. “That’s only a 20-pounder,” said Craig. “Wait until you hook a big one.”

[NEXT “Story Continued…”] On the way in, we stopped over a patch of reef where big snapper were holding. Our task was to catch the surf portion of the surf-and-turf dinner on tap for the night. It didn’t take long. Within minutes, we were hauling up Colorado snapper, their colors radiating through the clear water like those of a fever-dream clown.

That night, to celebrate catching my first rooster, I decided against a tattoo but opted instead for beer at Juanita’s, an open-air bar in town where locals and stray mutts mingle with gringo fishermen. Feeling lucky, I placed a bet on a crab race. But my crab took the night off, much to the delight of my fellow gamblers.

The next morning I awoke to a flock of parrots squawking in protest at a howler monkey that was, in fact, howling. “You’re not in New York City anymore, Dorothy,” said Laptew from across the room, and indeed I was not. Puerto JimÂ¿Â¿nez is scratched o of the rain forest: Monkeys hop from tree to tree, all stripes of butterflies and birds fill the sky, and ground sloths slink along at a snail’s pace. So it’s no surprise that the area was called “the most ecologically intense place on earth” by National Geographic. Wild critters are part of its charm-and they can also pose some hazards. Fer-de-lance, the world’s deadliest snakes, are not uncommon, and it’s advisable to stay on the gravel paths when you’re walking at night. But it was daylight as I headed to the dock, and my mind was on Pacific sails, the fish on which the Crocodile Bay Lodge has built its reputation.

To catch a sailfish on a fly rod, you must first bring it within casting distance. And to do this, four hookless lures, called teasers, are trolled behind the boat. When a sail rises to take one, its bill is visible, scissoring the surface. The mate reels in the teaser at warp speed-the fish following in mad pursuit-and then yanks the lure from the water as the flyfisherman casts a popper in its place. In theory, it’s a simple drill that anyone can master, but theory doesn’t take into account the flood of adrenaline that rushes an angler when a 120-pound sailfish wags its bill at you like an accusatory finger.

After a 45-minute ride on a 31-foot Striker sportfisherman, I took a seat next to a 12-weight fly rod armed with a gaudy feather popper we called the “Pink Passion.” The ocean was as flat as a tabletop, and signs of life-birds, bait, dolphins, and whales-were everywhere. I wasn’t sitting long before Capt. Leandro Porras shouted, “Feesh! Feesh!” A big sailfish was doing a Zorro impression in our wake just behind the teaser. The bait-and-switch drill worked, and I tossed the Pink Passion into the spot left by the teaser. When the sail turned on the fly, I set the hook. Unfortunately, I set it with such force that I broke the leader. Feesh off. Capt. Porras looked down from the fly bridge and nodded. He’d seen it before. Dejected, I sat in the fighting chair reliving my balk. But no more than 10 minutes later, the mate spotted a trio of sailfish sunning just beneath the surface, their sails raised in the air like electric-blue flags. As the boat passed by, the fish slipped into the depths and then emerged in our wake swatting at the teasers. When my shot came, I managed to sink the hook and stay connected.

[NEXT “Story Continued…”] My fish took to the air, jumping 10 feet high at least four times and then tail-walking across the surface for 20 yards. After a 15-minute fight I brought it to the boat-120 pounds. Before we could finish snapping photos, Porras spotted another trio of fish, and off we went at a breakneck pace. There were times when two and three sails fought for the same teaser. By midday we had raised 15 sails, and I had hooked seven, three of which I landed. By the time I bested the third, I was dripping in sweat. “You look like you need a dip,” said Laptew. “Last one in,” I said, “is carrying the bags through the airport.”

**[BRACKET “Getting There”] **Fly into the capital of Costa Rica, San JosÂ¿Â¿, spend the night, and then hop a 45-minute flight (booked by the lodge) to Puerto JimÂ¿Â¿nez the next morning just in time to head out on the water.

[BRACKET “Prices”] The cost for five nights’ lodging (including two in San Jos¿¿) and three days’ fishing is $2,495 per person (double occupancy) during the high season in winter (November 16¿¿¿May). That includes the puddle-jumper flight from and to San Jos¿¿, all meals, boat fuel, and fishing gear. From June to November 15, the price drops to $1,995, but the fishing doesn’t drop off at all. Contact: Crocodile Bay Lodge, 800-733-1115

[BRACKET “What It’s Like”] Crocodile Bay is in the tropics, and the sun is fierce. High SPF sunscreen, sun-protective clothing, and polarized glasses are necessary. You don’t need any special immunizations or booster shots for travel to the Pen¿¿nsula de Osa, and malaria is not a concern. In fact, although the lodge is in a tropical rain forest, there are relatively few mosquitoes.

[BRACKET “The Fishing”] Sailfish, roosterfish, dorado, and blue marlin roam these waters all year, but the action peaks during certain periods. Roosters team up to form bait-terrorizing gangs from mid-November to April. Sailfish numbers triple from January to May. November to December is the best time for dorado, tuna, and big blue marlin, which get hot again in March and April. -Catherine DiBenedettoavel to the Pen¿¿nsula de Osa, and malaria is not a concern. In fact, although the lodge is in a tropical rain forest, there are relatively few mosquitoes.

[BRACKET “The Fishing”] Sailfish, roosterfish, dorado, and blue marlin roam these waters all year, but the action peaks during certain periods. Roosters team up to form bait-terrorizing gangs from mid-November to April. Sailfish numbers triple from January to May. November to December is the best time for dorado, tuna, and big blue marlin, which get hot again in March and April. -Catherine DiBenedetto