You too can become disillusioned and cynical about our elected representatives. Here's how. 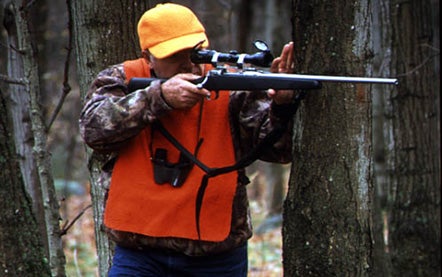 Hunters and fishermen have a far tougher time politically than most people. For the continued existence of their sports, they are dependent on two entirely different types of legislators-pro-gunners and environmentalists. Most pro-gun politicians are conservative Republicans. They are against abortion, support school prayer, and would like to see the West strip-mined, the Northeast atom-bombed and turned into a parking lot (we need the space for SUVs), and the oil pipeline designated as the state flower of Alaska. Pro-environment politicians are largely liberal Democrats. They are pro-choice, support vigorous separation of church and state, and would like to see all guns (including those used by cops) melted down and recycled, and baseball bats, bricks, tire irons, and kitchen knives sold only to persons who have been cleared by psychologists to purchase such dangerous objects. Normally, only a fraction of our electorate bothers to vote, due to a combination of revulsion and indifference, and it shows. How did American politics come to such a sorry pass? I have had six decades in which to watch the antics of what we call our leaders. I also have shaken the hands of two presidents (Nixon and Carter: Nixon had a horny hand, and my own developed a strange green growth after I clasped his mitt. Carter’s was flabby, but that was probably before he took up carpentry). And so I consider myself qualified to pontificate upon our present plight. Here are four unfortunate facts: I. Votes decide elections, but money buys votes. Essayist and author Gore Vidal pointed out some years ago that legislators no longer represent states; they represent corporations. Getting and keeping elected office at the national level requires a breathtaking amount of money. Where is a politician to get it? From the citizens who check off the $2 contribution box on their income tax returns?

No, they must go where the real dollars lie, and that is to the great corporations. And do these companies cough up millions of dollars because they want to see outstanding statesmen and leaders elected to office? Don’t bet your local wilderness area on it. As Don Vito Corleone said, “Someday I may ask a small service in return.”

Nowhere is the influence of money on our particular sports more clearly seen than in the disaster that is our ocean fisheries. In 1976, it was apparent that our major food-fish species were headed for trouble, and so Congress passed the Magnuson-Stevens Act, which extended U.S. control of its fishing waters from 3 miles off our shores to 200 miles, and at the same time barred foreign fishing vessels from those bounds. (Foreign fishermen do not vote in American elections.)

Into the breach rushed American commercial fishermen with a new generation of fish-massacring technology, and in a little over two decades, 30 major species-including cod, blue marlin, sailfish, swordfish, flatfish, sharks, tuna, and snappers-became either extinct, almost extinct, or so severely depleted that they cannot be “harvested.”

What happened was that commercial fishermen, although far fewer in number than sport fishermen, simply outspent everyone else in Washington with an interest in the oceans.

II. In politics, the truth has many faces. George W. Bush was in the oil bidness (Texan for business) before he got into politics. Mysterious Dick Cheney has been in and out of the oil business (Yankee for bidness) for many years. Either of them would sell the drilling rights to Arlington National Cemetery if oil was discovered beneath the graves, yet both will tell you with a more or less straight face that they are interested in protecting the environment.

All politicians feel obliged to say things they don’t believe in. Take the matter of hunting. The last president who was a real, enthusiastic hunter was Teddy Roosevelt, but just about every Chief Executive since then has gone through the mottions of posing with a firearm. Bill Clinton was photographed in a duck blind, clad in camo and clutching a shotgun, which he held as though it were a venomous reptile. When not posing with a gun, he did his level best to keep guns out of the hands of his fellow citizens.

Jimmy Carter, during his calamitous term in the White House, made much of being a quail hunter and flyfisherman, but presided over the closing of many thousands of acres of prime Alaska wilderness to sport hunting.

Poor Al Gore made all the right noises about being on the gun owner’s side, but it didn’t help him. His fellow Tennesseeans kept track of how he actually voted as opposed to what he said, and then voted for Dubya in 2000. Even Gore’s home county voted for Bush.

III. Don’t bother them with facts; their minds are made up. Years ago, a highly educated friend of mine wrote a long, carefully reasoned letter to Daniel Patrick Moynihan, who was then a New York senator, on the errors of the legislator’s anti-gun politics. In a rare sober moment, the venerated statesman wrote him back saying, in effect, “I concede your points, and you know what? I don’t care.”

There are senators and representatives who truly hate guns (Senators Feinstein and Schumer come to mind), and all hell will not sway them. Similarly, some legislators simply cannot abide the sight of a tree and will not rest until it is replaced by something useful, like a utility pole.

Nonetheless, on any issue, some lawmakers are fence-sitters, waiting to see how the wind blows before they cast their votes, and it never hurts to send a little wind their way.

IV. Doing nothing is still worse than doing something. Getting into politics is like taking your seat in an airplane. The odds are that the person jammed in 2 inches away from you is someone you wouldn’t let into your house unless you could train a gun on him. But does this deter you from flying? Of course not. Putting yourself in the proximity of the loathsome is the price you pay for traveling by air.

Look at it this way: American politics has remained essentially unchanged since our country’s founding. It is an open sewer with ghastly objects floating in it, nameless horrors bobbing in its noisome currents. Yet if we did not dive in, what would happen?

Our plains would be transformed into endless fields of corporate-owned, genetically engineered crops with not a square foot of cover anywhere for a wild creature. Our mountains would be riven with ski slopes, and bedroom communities would cover what were once their foothills. Our seas would still shine, but the gleam would come from oil slicks and the eerie glow of radioactive waste. And our guns would be history.

So hold your nose, take a deep breath, and engage in the political process. It’s putrid, appalling, and enough to make you want to run in the opposite direction-until you consider where that direction leads. Are there any questions from the press? I didn’t think so. Thank you, and good night.