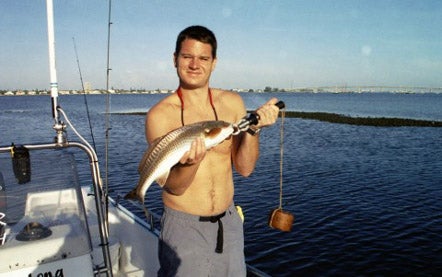 As our guide cut the throttle, the skiff came off its plane and settled gently to rest. Miles of glassy water stretched away across the flats toward Padre Island and the warm glow of the rising sun. As my wife, Lori, and I grabbed our gear and slid over the gunwale, the waters of the Laguna Madre provided a warm welcome to south Texas, and I began to fish with my eyes, as if we were hunting antelope instead of stalking red drum-a.k.a. redfish.

Within minutes, Lori and I each spotted telltale dimples on the mirrored surface of the bay-all an experienced redfish angler needs to get his pulse racing. When a fish finally appeared, my predatory instincts kicked in; tailing reds are feeding reds, and I quickly moved into position to cast.

My fly fell right where I aimed, a few inches in front of the fish’s nose. The water bulged, and when I strip-set the hook the morning’s serenity evaporated into frothing spray. Feeling vaguely guilty, I glanced over my shoulder at Lori only to see her fast to a redfish of her own. We were both working hard in the home of the Texas reds-the blue-collar bonefish.

I love the excitement of flats fishing, but a week at a premier destination for bonefish, tarpon, or permit can put a significant dent in the credit card. So in the last decade I’ve come to know and love the everyman’s alternative to those high-profile species: the redfish.

Redfish and bonefish have a lot in common. Both follow the tides onto shallow flats, allowing anglers to stalk them. They enjoy similar diets of shrimp, crabs, and small baitfish, and each responds to similar fly patterns. Of course reds can’t match the blazing speed of bonefish, but they fight with powerful, dogged runs that can easily take a fly-rod angler into his backing. Unlike bones, reds will take small surface poppers, and they are a delight on the table, with a light, firm flesh that lends itself well to any dish from ceviche to classic blackened redfish seared in a cast-iron skillet.

I’ve caught reds throughout most of their range from the Atlantic across the Gulf, but the complex series of channels and flats that separates Padre Island from the mainland has been the most enjoyable place I’ve fished. This area appeals to me for several reasons: It’s cheap and easy to reach, it offers year-round fishing, and you can wade the flats, which I prefer to standing in a skiff. Plus, the Laguna’s waters harbor other sporting species like seatrout and black drum.

[NEXT “Continued…”] I usually set up base in Port Mansfield, a tiny bayside community located between Corpus Christi and Brownsville that exists for no obvious reason other than to get anglers pointed toward fish. Accommodations include a few motels catering to anglers and numerous condos for rent: There’s nothing fancy, but the prices reflect the ambience. It’s my kind of place-one that emphasizes substance over style and hardcore fishing over pretension.

Trip Planner
**When to Go: **Redfish inhabit the flats of the Laguna Madre year-round. Locals prefer to fish in late spring and early fall because of more pleasant and predictable weather, but we’ve also done well there in February and March.

**Regulations: **Seasons are open all year. The daily limit is three redfish between 20 and 28 inches.