One hand casting: how a reelless 13-foot rod is revolutionizing fly fishing. 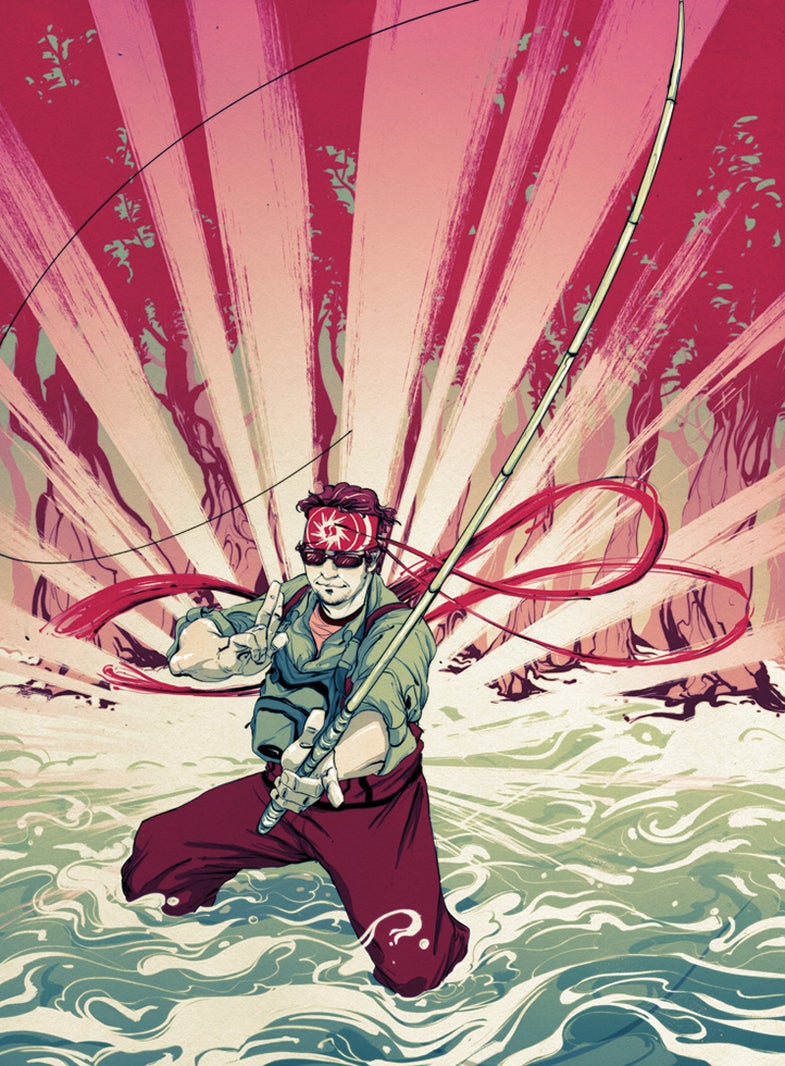 The angler appeared from around the bend, carrying a spinning rod and worm tin. He stopped and stared at me as I used a 131⁄2-foot pole with a 12-foot length of line to work a run of Neshaminy Creek during the height of Pennsylvania’s trout season. He didn’t speak until I raised the rod as it bowed under the strain of a trout. “Son, what are you doing with that cane pole?” he asked.

Tenkara is an old form of flyfishing developed on the small mountain streams of Japan, where the long, light rod and thin line made it possible for anglers to accurately and stealthily present flies in tight pockets and seams. Since Daniel Galhardo founded Tenkara U.S.A. in 2009, the buzz about the practice has grown loud. Last spring I fished several streams with a Tenkara outfit to see what that buzz was about–and to find out if it would really catch me more trout.

Casting and carrying The 11- to 14-foot graphite rods, which start at $160, taper quickly to a tip far thinner and more flexible than that of even the lightest traditional fly rod. At the end of the tip is a short length of string to which the fly line is loop-knotted. Tenkara fly line is composed of multiple handwoven monofilament strands, making it light and springy. It unrolls, floats, and loops like regular fly line, but the design promotes less drag on the water and more stretch than traditional line. It lands like a feather and doesn’t absorb water. Lines, which range in length from 101⁄2 to 13 feet, feature an end loop that lets you add a 2- or 3-foot piece of 4X or 5X tippet.

The author astream with a Tenkara rod. The 11-foot Iwana model collapses down to 20 1/2 inches.

Shorter Tenkara rods are for use on streams you could cross in about five bounds. The longer sticks were developed for U.S. anglers who fish larger streams. However, that doesn’t mean a wide, roaring tailwater. Tenkara outfits shine in pocket water.

I noticed a benefit immediately when nymphing a short seam behind two boulders with the 131⁄2-foot Amago rod. Whereas getting the fly to the proper depth with a traditional fly rod would have required an upstream roll cast, a mend of the line, then high-sticking for the few brief moments the fly was in the zone, the Tenkara rod let me reach out and drop the fly just above the seam. I lifted the line off the water until only the tippet hung in the sweet spot, resulting in a drag-free drift with no mend. Because Tenkara rods are so sensitive, I instantly felt the trout in that seam pick up the fly.

With no stripping or line management involved, I was also able to cast with either hand and cover water quickly, flicking shots in different pockets for a drift or two. The whippy tip of a Tenkara rod also lends itself perfectly to slingshotting your fly in tight quarters. Perhaps most impressively, these rods telescope down to a length shorter than one section of a standard fly rod, making them ideal for backpack fishing.

The Tenkara fish fight Japanese Tenkara anglers primarily chase trout measuring less than 10 inches, though the longer rod models can handle trout to 20 inches, according to Galhardo. During my testing I hooked several trout in the 12- to 14-inch range. The rod kept pressure on well, allowing me to keep the fight within a 30-foot radius of where I stood. When the fish tired, I drew the rod back over my shoulder until the line was close enough to loosely grab with the fingers of my rod hand, so I could gently lead the fish to the net in my other hand.

You can find online videos of anglers landing trout in the 24-plus-inch range on Tenkara rods, but they were lucky. I wasn’t when a 6-pound brown sipped my emerger, shot upstream, and popped the leader. I can’t say Tenkara caught more trout than my regular fly outfits, but it did get me fish in places where presenting a fly with my 5-weight would have been very difficult. The next time I find a trout rising in a tight spot, I’ll reach for the Tenkara rod tucked in my wader belt.