When early spring brings unstable water conditions to your local trout stream, river, or lake, don’t wait for levels to... 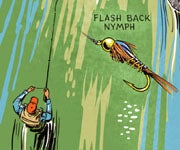 When early spring brings unstable water conditions to your local trout stream, river, or lake, don’t wait for levels to drop before donning your waders and breaking out your fly rod. You could be tapping into some terrific trout action in that high, off-color water while other fly anglers are sitting on the couch waiting for things to clean up. These three killer tactics from veteran Kentucky and Tennessee guide Chris Nischan will help you hook up on the fly when the going gets tough.

A – Cut Some Slack
In high, murky water, big trout will often hole up in slow-spiraling eddies. Contrary to popular belief, these fish will frequently face downstream in the slack water created behind boulders and other current-breaking structure. Nymphs that incorporate some purple material or have flash backs are highly visible to trout in dirty water. Fish them on a 10-foot leader, starting at the outside edge of the eddy (1) and gradually working toward its center (2). Cast upstream and allow the fly to dead-drift. Take up the slack as the fly drifts back toward you (3), watching the line for subtle bumps and stops.

B – Lift and Lower
Never overlook shallow runs between deep runs in early spring for big trout, especially when water levels come up and increase the depth of those shallow runs a bit. In these spots Nischan prefers an in-line double fly rig, consisting of a Finnish raccoon shad streamer 18 inches below a size 10 Beadhead Pheasant Tail nymph. Cast upstream and allow the flies to sink (1), but don’t strip the line. Instead, gently lift the rod (2), then lower it (3), to give the flies an enticing crippled action. Trout often strike just as the flies begin to rise in the water column, or immediately after they begin to fall.

C – Swim a Spring
If you’re fishing still water, use a thermometer to locate springs, which can produce water 10 degrees warmer than the rest of the lake. Submerged weedbeds are thicker in these areas, and trout will cruise them while feeding on aquatic insects. On a 20-foot leader, tie a light soft hackle on a dropper on top, a lightly weighted nymph on a dropper in the center, and a heavy nymph at the end. Make an open loop cast parallel to the weedbed (1) and swim the flies toward you very slowly (2). Gently twitching the rod tip from side to side, pausing and repeating, will trigger strikes from following fish.