Unleash the Dawgs to Land a Wall-Worthy Muskie

Wall Size: In the world of muskie fishing, 50 inches has long been the length that qualifies a fish as... 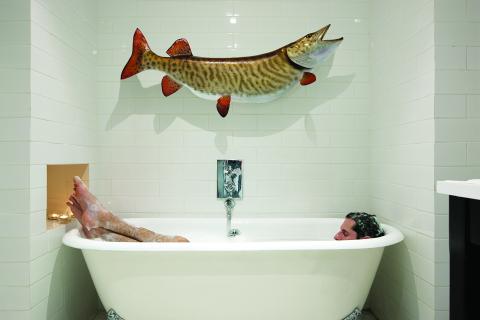 Wall Size: In the world of muskie fishing, 50 inches has long been the length that qualifies a fish as a true trophy. Even some of the most dedicated muskie anglers spend years on the water before landing a 50, if they ever land one at all. Whereas small muskies can be less finicky and more predictable, a 50-incher–which can be 12 to 20 years old–may eat once every other day during a 10-minute feeding window. Be there at the right time with the right lure or strike out.

Special Case: Some anglers opt to have a replica of their first fish made, regardless of size, because muskies are so difficult to catch. With this species, it’s as good a reason as any to make room over the fireplace (or wherever you think is appropriate). If you happen to catch a hybrid tiger muskie, any fish weighing 20 pounds or better will turn some heads.

✖ Montreal, Quebec The section of the St. Lawrence River that cuts through this Canadian metropolis is notorious for huge muskies that can top 60 inches. A variety of structure creates the perfect habitat.
✖ Tower, Minn. Muskie stockings in Lake Vermilion began in 1984. In the years since, the large amount of baitfish in this lake has allowed the beasts to thrive.
✖ Warren, Pa. The upper Allegheny River may not have the same rep for big muskies as other waters, but it quietly gives up its share of trophies every year. A good population of trout fattens them up.

Home Waters: Bruce Shumway has been a guide in Hayward, Wis., since 1978, and has led clients to more than 50 fish taping 50 inches and up. Shumway fishes all the lakes around Hayward, but if he has to peg a favorite, it’s the Chippewa Flowage, known locally as the “Big Chip.” This massive impoundment features a vast network of lakes, bays, islands, and creeks. According to Shumway, the larger the body of water, the bigger the muskies it produces.

Trophy Hunting: “You’re going to catch the largest fish late in the year,” Shumway says. “From about Halloween to the middle of November, they’re going to be eating a lot before winter sets in.” Shumway likes water temperatures in the high 30s to low 40s, and notes that earlier in fall the fish will hold closer to shore in shallow water, then gradually drop deeper as the water cools. “Once the fish drop off to water 18 to 30 feet deep, I hit areas where hard bottom meets soft.”

Top Lure: Shumway’s first artificial choice for enticing a bite from a giant muskie is a 12-inch Bull Dawg soft plastic. These heavy curly-tailed baits will mimic a variety of forage, though Shumway starts with blue and silver to match the ciscoes that spawn in fall. “Let the bait sink a little, then slowly work it back with twitches and pauses,” he says. “The trick is watching your line for subtle movements. Hits don’t feel like much. But because of the thick plastic on those lures, a good hookset is important.”

Top Bait: Once the water dips below 55 degrees, your shot at a 50-plus-incher increases significantly with live bait, Shumway says. That’s why he keeps a 15- to 24-inch live sucker on his Fuzzy’s E-Z Duzzit Clip-N-Go rig behind the boat while he’s working lures. The hooks pull free of the bait when you strike and embed in the muskie’s mouth, reducing the chance of gut-hooking the fish.