Freak Out a Skipjack for a Striped Bass Wall-Hanger

Wall Size: Whether you’re after a landlocked freshwater striper or one cruising along a salty shoreline, the fish anglers covet... 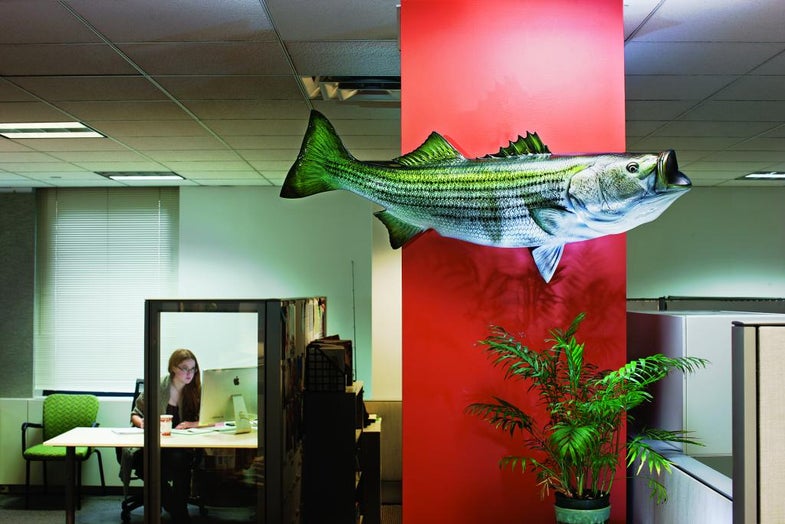 Wall Size: Whether you’re after a landlocked freshwater striper or one cruising along a salty shoreline, the fish anglers covet is that first 40-pounder. Stripers are a slow-growing species, so a fish that size can be 20 years old or older. In that time it almost certainly has encountered plenty of hooks. If you fool a 40, you’ve duped one wise fish.

Special Case: You should score a replica if you can score a 25-plus-pounder on the fly in fresh- or saltwater. If you’re into surf casting, your first beach bass weighing 30 pounds or more should also be considered for the wall.

Trophy Hunting: “You can catch one in Lake Cumberland, but a 40-pound fish will be easier to find from mid May to mid June in the river,” Sasser says. “That time of year, the fish in the lake are moving upstream to spawn.” These egg-laden females seek out shallow areas less than 10 feet deep, and gravitate to the many logs and snarls along the Cumberland’s banks. Find a spot like this at the mouth of a feeder creek and make sure you’re there at first or last light.

Top Bait: “Nothing gets a predator to react like a struggling baitfish. Gizzard shad are docile on a hook. That’s why I prefer 14- to 18-inch skipjack herring. They go crazy.” Sasser uses a sabiki rig to collect bait, then runs a 7/0 Octopus hook through the herring’s top jaw and hangs it 10 feet behind a planer board on a 30-pound fluorocarbon leader with no weight. He’ll slow-troll through the shallows, running the bait close to structure.

Top Lure: “My favorite, bar none, is a 7-inch Cotton Cordell Red Fin,” Sasser says. “That bait mimics a gizzard shad or skipjack better than any others I’ve ever used.” He likes a Red Fin in chrome and black, and will pitch one in the shallows and around current-­breaking structure. “When you retrieve slowly, the lure makes a perfect V wake across the surface that big fish seem to like.”