Go With Purple Muddlers to Land a Wall-Worthy Steelhead

Wall Size: A 20-pound steelie earns bragging rights, but finding and hooking a fish this size isn’t the biggest challenge.... 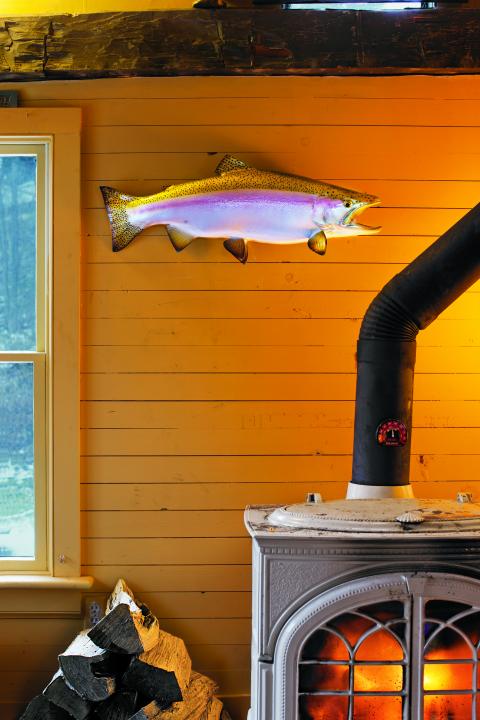 Wall Size: A 20-pound steelie earns bragging rights, but finding and hooking a fish this size isn’t the biggest challenge. The difficult part is landing a ticked-off 20-pound steelie in a shallow river.

If you can avoid getting spooled by literally running after the fish, and keep the brute clear of snags, and maintain pressure when it turns on a dime and runs the other way, and actually put that hunk of chrome in the net, then you have positively earned the right to splurge on a mount.

Special Case: If you hit the river on a nasty, frigid February day instead of a pleasant fall afternoon, any steelie you fight with numb hands, play around ice floes, and land in water that would cause instant hypothermia is replica-worthy.

✖ Baldwin, Mich. A stay in this town puts you close to the Pere Marquette and Manistee Rivers. Michigan’s Manistee-strain fish are revered for their brutal fights.
✖ Pulaski, N.Y. Tons of trophy steelhead push up the Salmon River from Lake Ontario in fall along with runs of spawning salmon. The fish fatten up on salmon roe, then winter over in the stretch of river below the dam.
✖ Painesville, Ohio Ohio gets its steel from Michigan, so the Buckeye State also has aggressive Manistee-strain fish. They’ll stack up in the Grand River, which is large compared with most Ohio streams and can be floated or waded.

Home Waters: Sabol has been fishing the famed Des­chutes River in Oregon his entire life, and in 2004 he opened his own outfitter business, Deschutes Steelheader Co. Throughout his guiding career, he has netted many 20-plus-pound Des­chutes chromers for clients, and watched even more hook fish the same size that, as he puts it, “we never got to see.” Most Des­chutes steelhead that break the 20-pound barrier are known as B-run fish–those that stay in the ocean longer, grow bigger, and migrate upriver later than A-run fish. While salmon and trout roe are popular steelhead baits throughout the country, natural bait cannot be used on the lower Des­chutes, so Sabol has had to hone his skills with flies and artificial lures.

Trophy Hunting: “B-run steelhead start showing up in September and keep coming in through mid ­November,” Sabol says. “They’re just taking a breather in the Deschutes before moving back into the Columbia River and on to Idaho.” Large steelhead don’t behave any differently than smaller fish in terms of feeding habits or preferred holding water, so catching a 20-pounder is a game of persistence and quick thinking. “Steelhead of all sizes are going to hold in areas of moderate current between fast runs,” he says. “Hooking one means picking through smaller fish and being consistent with your presentation. Once you connect, you’ve got to do your best to stay parallel with the fish and run down the bank. Then you just hope the fish doesn’t take you somewhere it’s impossible to follow.”

Top Fly: According to Sabol, it’s hard to go wrong on the Deschutes with a size 4 Muddler Minnow. And make it purple. “Our steelhead respond very well to purple,” he says. “Plus, I can present a Muddler several different ways.” Steelhead are very light sensitive and are most apt to feed on the surface early or late in the day. At these times, Sabol uses a 14-foot leader and floating line to skate a Muddler across the surface or just below the film. When the sun is high and the river is lit up, he’ll switch to a sink-tip and 3-foot leader, and swing the Muddler deep. In both presentations, simply cast downstream at a 45-​­degree angle, keep your line tight, and let the fly ride with the current. To handle those B-run giants, Sabol recommends a 7- or 8-weight outfit.

Top Lure: On superbright days when steelhead are tough to get on flies, Sabol ties on a 3⁄8-ounce Vibrax spinner in blue and chrome. Similar to his fly technique, Sabol casts downstream at a 45-degree angle and lets the lure whip around in the current. “If you can present a spinner just deep enough that the fish don’t need to look directly toward the surface, they’ll hit on the sunniest days.”

From the April issue of Field and Stream magazine.