by Kirk Deeter Spanish nymphing blends characteristics of both the Czech and French styles. Like Czech nymphing, you’re using a... 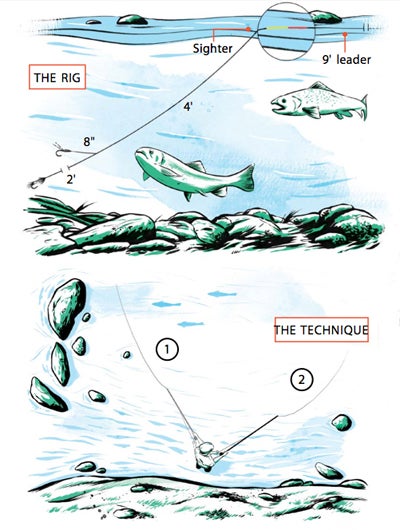 Spanish nymphing blends characteristics of both the Czech and French styles. Like Czech nymphing, you’re using a heavy weighted fly on the point and leading the flies through a run with the rod tip pointed at the water. Like French nymphing, the leader in this technique is very long–15 feet or longer–and rather than feel, you are relying on a sighter that is relatively far from the end of the fly line to tell you when to set the hook.

Spanish flyfishermen created this nymphing technique to help them catch the notoriously elusive fario (brown trout) in Pyrenees mountain streams. They found that the extra-long leader is the key to avoid spooking the fish.

The Rig: The ideal rod for Spanish nymphing is a 10- to 12-foot 3-, 4-, or 5-weight. Use a weight-forward floating line and a 3X to 5X 9-foot tapered leader. Spanish anglers tie a two-tone sighter to the end of the leader. Make the sighter by splicing two 12-inch sections of Sunline Sig­lon F mono (fishusa.com) together with Uni knots or a Blood knot. Below the sighter, attach 4 feet of 5X tippet and leave an 8-inch dropper tag while adding 2 more feet of 5X for your point fly.

Where It Works: This technique is especially effective in the tail­outs of runs, in slow, deep water, and in spots where you have to reach across fast or deep water into a seam where rainbows and browns are holding.
**
How It Works:** Cast at a 45-degree angle upstream (1), then follow the flies with the tip of the rod as they move downstream. With such a long leader, back casting is almost impossible, so lift the rod high at the end of the drift, letting the current load the rod (2), and lob the line back into the target zone. Keep your eyes focused on the sighter and set the hook on the slightest stagger, change of direction, or pause. The key to effective Spanish nymphing is choosing a point fly that is heavy enough to tick the bottom but not so heavy as to hang up on every drift. For that reason, anglers switch point patterns often–usually run by run.