by T. Edward Nickens Avoid Treble I recently spent a half hour un-trebling a trio of snarled plugs, and more... 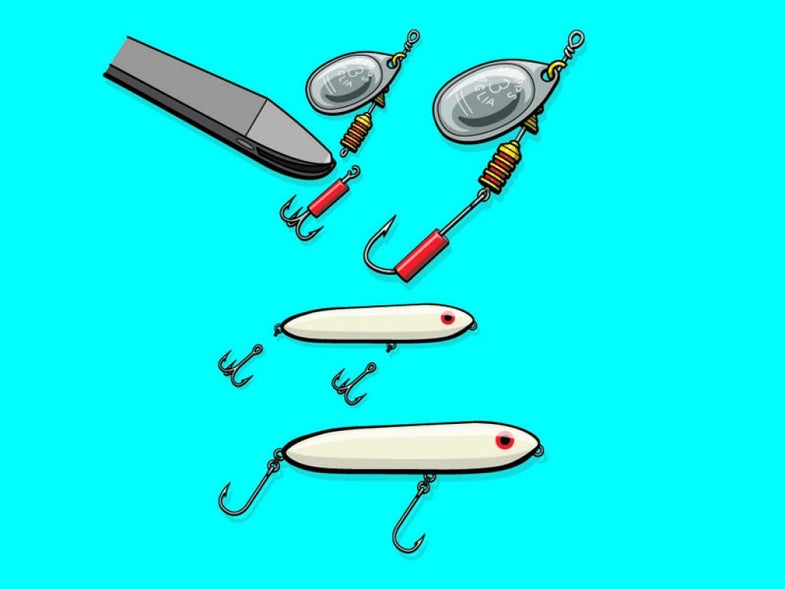 I recently spent a half hour un-trebling a trio of snarled plugs, and more than once I’ve extracted trebles from human flesh. And they rip fish mouths to pieces. I might lose a few fish by going solo, but I’ll save a few more. If you’re fishing with kids, especially, replace treble hooks.

In-line Spinners:
Most spinner hooks aren’t attached with a split ring, so use side-cutting wire snips to remove the trebles. If the hook eye is particularly stout, clip the eye in two places to create a gap, and slip it off the body wire. Replace with open-eye hooks closed with needle-nose pliers.

Hard Baits:
Evaluate the track of topwater and diving lures before replacing trebles so you can compare their performance with single hooks. Most will do fine. For many largemouth baits, replace the hooks with 1/0 or 2/0 ringed live-bait hooks. Remove the belly treble altogether, or replace with a ringed live-bait hook with its point facing forward. The hook point on the trailing hook should face up.