It’s the rare angler who didn’t spark his passion for fishing at an early age by watching a bobber dip... 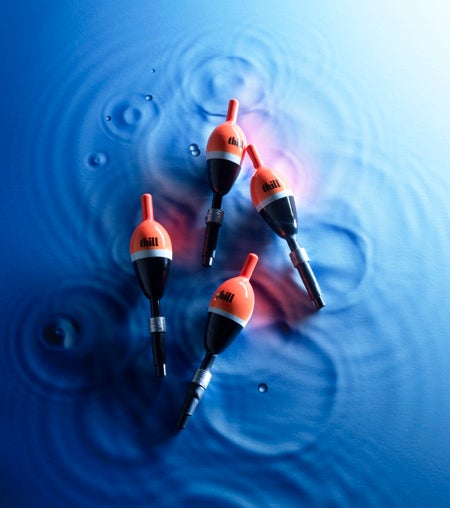 It’s the rare angler who didn’t spark his passion for fishing at an early age by watching a bobber dip below the surface under the strain of a bluegill. But those youthful memories don’t mean you’ve become too old for bobbers. Grown-up thinking allows you to use them for the species you fish for now–even stripers and sharks.
**
Slip a Summer Smallie**

Suspending a hair jig below a slip float is a trick used for years by anglers chasing coldwater smallmouth bass that won’t move far to chase a bait. I’ve observed the same behavior in bass during the extreme heat of a summer afternoon, so when smallmouths seek refuge in deep holes in my home rivers, I’ll rig a tube or soft-plastic crawfish on a jighead below a slip float. I’ll set the depth so that the lure remains just off the bottom and send it upstream.

As the float rides the current through the hole, I’ll lightly jig to give the lure vertical motion. The float lets the lure ride at the proper depth rather than abruptly fall to the bottom. It’s an easy meal to grab that doesn’t require the fish to move much to reach. The tactic can be applied in any moving water where the bite slows in summer. Try replacing the tube with a small hair jig for trout, or with a long white Slug-Go on a jighead for pike.

Paper clips and alligator clips: That’s what Ed Kainec used to create his prototype release float. The Ohio walleye and bass angler was looking for a way to suspend a bait at a specific depth without the hassle of setting a slip float and without needing to fight the float after the strike. The result was the Redi Rig (bottom; $5-$9; redirig.com). These bobbers, available in sizes small enough for crappies and big enough to suspend shark baits, take the frustration out of depth control.

A snap on the top stem of the bobber clips loosely around the main line. On the bottom stem, two spring-loaded rubber washers open and close, so you can sandwich your line in between. It’s not very castable if you have your bait set at more than a few feet. But when you’re fishing vertically, or making only short casts from a boat, the system lets you easily attach the float long after your bait has reached the desired depth. A striking fish will take the float under, but when you set the hook, the line snaps out from between the washers, and the float slides freely on the line.

Redi Rigs have become very popular among anglers looking to suspend large live baits, such as suckers for muskies or shad for catfish, but some say that the Redi Rig boom started in Chesapeake Bay, where captains looking for an edge turned to the big bobbers when fishing for big stripers.

“They allow us to suspend eels on up to 20 rods during a drift,” says Virginia charter captain Neil Lessard (topdogcharters.com). “We cover the entire water column.”

Any bobber’s dance and dip takes me back to the hours I spent with my dad and grandfather at a local lake. The only difference is that these days, the fish under my float is usually something with a bit more drag-pulling ability than a bluegill.