You can spend $500 or more for a top-end fly reel that’s as exquisitely machined as a Rolex watch. Or... 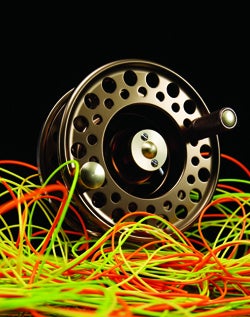 You can spend $500 or more for a top-end fly reel that’s as exquisitely machined as a Rolex watch. Or you can pay about a fifth of that and still get a model that will serve you well for many seasons to come. These days, a C-note will buy you a lot of reel–one that looks good, balances well, picks up line fast, and comes with a drag system smooth enough to handle big fish on light line. We asked four trout anglers to spend an entire summer testing the four reels below to determine which offers the best performance for roughly $100.

L.L. Bean Mid-Arbor
The Lowdown: This mid-­arbor reel blew our testers away. All four gave it top marks (by a wide margin) for both performance and value. “The fit and finish is just amazing at this price,” said McCosker. The team praised the reel’s efficiency and disc drag, which was “smooth and easy to adjust, even while fighting a fish,” said Dabney. “The mid-arbor design allowed me to retrieve line much faster than I can with my traditional reel.” Cornelius lauded the reel’s durability; he knocked it against rocks several times to no apparent ill effect. Anselmo said that in addition to great performance, the reel had a “beautiful appearance.”
Hits: “You get a lot of reel for the money.” –Dabney
Misses: “It is a little heavier than the others models we tested.” –Anselmo

Cabela’s Prestige Premier
The Lowdown: Overall, the testers liked the performance of the Prestige Premier but were split over fit and finish. Anselmo was very impressed and thought the reel had a “super­smooth line retrieve.” He added that the disc drag was smooth and completely silent, even when fighting big fish. Dabney, however, believed the drag could have been smoother and voiced concern about its long-term durability. Cornelius said the drag worked well but felt that setting it was a bit imprecise. McCosker called the reel “clunky” and complained that the “push on/off” spool did not lock into the frame as well as the others. He did praise the smoothness of the drag.
Hits: “Best in class when handling large fish.” –Anselmo
**Misses: **”Not convinced the finish will stand up.” –McCosker

Ross Fly Rise
The Lowdown: Ross built its large-arbor Flyrise around its Evolution LT drag system but in a cast, rather than machined, aluminum frame. The testers agreed the system worked well, but raised questions about fit and finish and the use of plastic parts. “Nice design, but the construction seems a bit flimsy,” said Dabney, who noted that the aluminum frame scratched easily, and that converting the reel to right-hand operation involved removing four small screws–“a more complicated procedure” than the other reels required. Cornelius felt the reel was “very well made and durable.” He said the drag performed well but his “hand kept slipping off the knob,” a complaint echoed by McCosker.
Hits: “Failproof drag system.” –Dabney
Misses: “Price is too high for what you get.” –Cornelius

Redington Drift
The Lowdown: **The mid-arbor Drift is the only reel here with a traditional click-and-pawl drag system, and the testers penalized it accordingly. Anselmo felt the drag’s performance was “subpar,” with the least amount of adjustment. As a result, he couldn’t get the proper setting for fighting large fish on light line. Cornelius noted the “old-school” design but nonetheless praised the reel’s overall performance; the drag was smooth, but he thought the adjustment could be improved to deliver a wider range of settings. Although Dabney wasn’t a fan of the plastic handle, he felt the reel itself could stand up to tough use over time. To him, the traditional design was “not a bad thing.”
**Hits: “Simple and lightweight.” –Cornelius
Misses: “Underwhelming.” –Anselmo