Innovations in marine electronics are giving anglers underwater views that would have been considered science fiction just a few years... 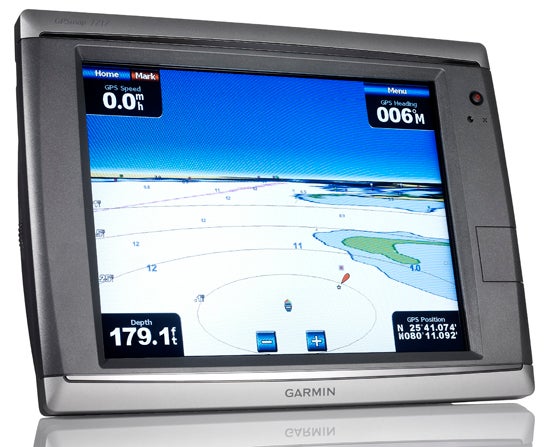 Innovations in marine electronics are giving anglers underwater views that would have been considered science fiction just a few years ago. Side-scan or side-imaging technology can peer laterally for hundreds of feet, providing bottom images that look like photographs. With it, anglers can identify structure, bait, and gamefish that have eluded them with regular sonar. Meanwhile, new sonar units that use chirps (as opposed to the traditional pings) to transmit and receive multiple frequency signals simultaneously are giving deep-water anglers on the Great Lakes and the open ocean readings with unprecedented accuracy and resolution. There’s no getting around the fact that these units are very expensive, but they provide underwater views that have never been possible before. I recently tested the latest models from four different manufacturers to see how they stack up.

Garmin GPSMAP 7212 **
**The Lowdown: In chirp mode, the unit sweeps across frequencies from 28 kHz to 210 kHz, providing phenomenal image clarity and target separation in water over 50 feet deep. You can also adjust the frequency to focus on fish at chosen depths–a fantastic feature. Structure and fish images remain crystal clear down to an amazing 10,000 feet. The 12-ince touch-screen system presents a host of functions and views.
Hits: The selectable frequencies feature is great. Multiple zoom screens can display several “slices” of the water column at once.
Misses: This complex system require a lot of study time. It’s extremely expensive.
Who Should Buy: Tech-savvy anglers who want to see it all clearly–structure, fish and bait–even at great depths.

Humminbird 1198C Combo
The Lowdown: This unit’s bright, 10.4-inch LCD screen can display up to four functions together, including side and down imaging, 2-D sonar, and an onboard GPS chartplotter with detailed maps. Side imaging peers to 240 feet on each side of the boat, creating detailed images of bottom structure and fish. Saving structure coordinates to the chartplotter is a snap.
Hits: Easy to use. Networking capabilities link to unique peripherals, like WeatherSense (which graphs barometric pressure) and CannonLink (which tracks up to six downriggers).
Misses: Lacks radar capability for big-water users. The ContourXD lake charts are available for only a limited number of states.
Who Should Buy: Fresh- and inshore saltwater fishermen who want the latest technology without becoming overwhelmed.
_****
_

Lowrance HDS10 Gen2
The Lowdown: With StructureScan, it has side and down scanning, broadband sonar, a GPS chartplotter, and mapping and radar ­capabilities–any four of which can be viewed on the 10.4-inch screen simultaneously. The side scan reaches out to 300 feet, providing detailed bottom structure and fish imaging in numerous color palettes. The proprietary real-time StructureMap can permanently save side-scan imaging as a map overlay to create 3-D bottom charts.
Hits: StructureMap is an amazing tool that sets new standards for sonar in this price range.
Misses: The menu frequently requires too many keystrokes.
Who Should Buy: Technical-minded fresh- and inshore saltwater anglers who want side scan in an integrated package.
_
_

Simrad NSS12 **
**The Lowdown: The newest Simrad sonar-plotter’s 12-inch LCD touch screen has a highly intuitive icon menu system that works much like an iPad. Changing the split-screen functions and backing up is as simple as touch and drag. Dropping a waypoint on a structure point is touch and click. Performance is blazingly fast. Both side-scan technology and chirp sonar are fully integrated with other functions; the latter offers five times better resolution than traditional ping sonar with excellent bottom and target resolution. (Shown: the 8-inch NSS8.)
Hits: This is the easiest-to-use high-end combination sonar system I’ve tested at any price. The speed is remarkable.
Misses: Expensive, but you get a lot for your money.
Who Should Buy: Anyone who wants both side-scan and chirp for the ultimate in sonar performance at any depth.