Use This Smallmouth Technique to Gaurantee Big Hits

by the Editors Bass Pro, Mark Chapman has refined a smallmouth technique that Mike Iaconelli calls plunking. Rather than using... 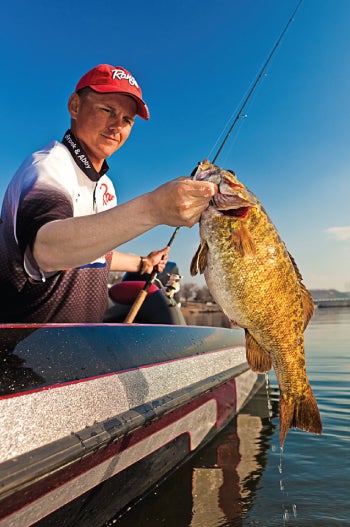 Bass Pro, Mark Chapman has refined a smallmouth technique that Mike Iaconelli calls plunking. Rather than using light spinning tackle and gossamer lines, Chapman goes with a pair of stout 71⁄2-foot flipping rods, each matched with 20-pound fluoro, a 3⁄4-​ounce pegged tungsten bullet sinker, and a 3/0 straight-shank worm hook. One hook is Texas-rigged to a plastic tube, the other to a 3-inch Zoom Speed Craw.

Chapman makes short pitches to sparse, submerged grass 8 to 11 feet deep, then strips line off the reel. This lets the sinker zip his baits straight to the bottom with no resistance. “The fast sink rate is the key to this technique,” he says. “It triggers a reaction strike.” If a fish doesn’t have the bait when Chapman lifts his rod tip, or after the first hop, he reels in and makes another pitch. The heavy tackle lets him apply heavy pressure and swing the bass into the boat quickly. When I fished with Chapman, he didn’t lose one fish, and the short battles were easier on the bass.

This approach may make a light-tackle guy gag, but consider this: On light tackle, a fish can wear itself out. Chapman’s method puts the fish back in the water in better shape.