Joey Nocchi, 30, was kayak fishing the rocky coast of Cambria, Calif., this May when a great white attacked his... 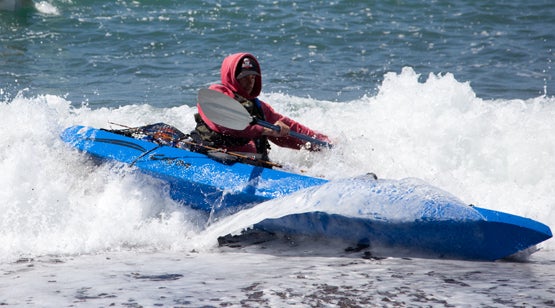 Joey Nocchi, 30, was kayak fishing the rocky coast of Cambria, Calif., this May when a great white attacked his kayak, knocking him into the water. He tells the story:

My two buddies and I launched out of Leffing­well Landing at first light that Saturday, to fish the kelp beds for rock cod. I’d won a fishing tournament in those waters only six days earlier [inset photo], and this was another perfect day. I’d landed an 8-pound red rockfish before we started paddling back around 2 p.m.

I had just emerged from the paddies and was 250 yards from shore in water 30 feet deep when suddenly I felt a thud–like I was hit with a baseball bat–and I was launched 4 feet in the air. That’s when my friend Matt saw a 14- to 15-foot great white shark break the surface, mouth open, as I fell into the water.

The next thing I knew, the shark was swimming through the foot of space between me and where my kayak had landed upside down. I thought I was done for. I screamed, “Oh, - - - -,” yanked my hands back into my chest and tried to lean away. The shark passed so close to me that its tail brushed my hands. Its skin felt like 80-grit sandpaper.

I could see the great white clearly as it swam off, but I didn’t know if it would be back. Still spooked, I jumped on top of my kayak like a cat, not even bothering to flip it over. I just wanted to be out of that water.

Matt kept a cool head and told me, “That shark knows it made a mistake. You have to get back in the water and flip your kayak so we can get out of here.” He went to retrieve my paddle, and I stood up, willing myself to get off the kayak. I really didn’t want to. Finally, I did what I had to do and scrambled inside.

I was lucky to make it back to shore without sinking. The bite actually punctured the bottom of my craft, and it took on water fast. A shark researcher confirmed that the bite mark, at 20 inches wide and 22 inches high, is consistent with a great white of the size that Matt described, and he offered an explanation for the attack: Gray whales were migrating north, and the shark probably mistook the boat’s blue bottom for a baby whale.

The thing is, I wanted to get famous for catching big fish, not getting eaten by one.