The day my grandfather died he said he was going fishing, but he only made it as far as the... 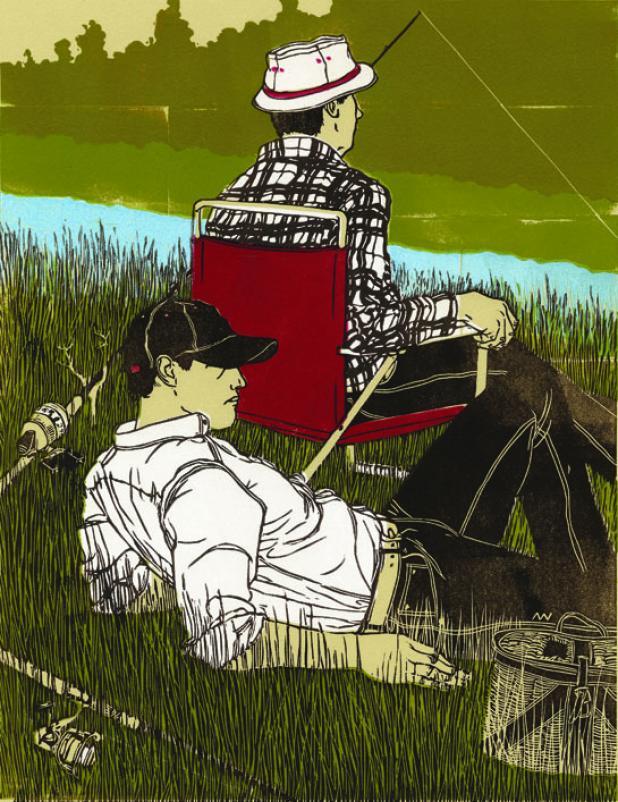 The day my grandfather died he said he was going fishing, but he only made it as far as the bathroom. It was the best he could do.

I was supposed to go out with him. “C’mon, Friend!”

That’s what he called me. Like this: “Friend! Get me a beer!” and “Friend! Come hill my potatoes!” He also called me “No Friend.” Like this: “No Friend! What’sa matter with you? You got a screw loose?”

Anyway, I knew he wouldn’t make it. But I suspected he wanted once more to drive his putt-putting red Omni to the Dyke Road–a gravel lane where he’d lately been pulling to a stop in the middle of the road above the culvert, opening the car door, and casting from the driver’s seat into the pool below.

It was, like I said, the best he could do.

A few years earlier, before his legs would no longer carry him to the stream bank; before the hit-and-run incident in which he gunned the big Chrysler he drove then out of his driveway in reverse, creamed my brother’s parked new car, shifted into drive and went fishing; before it was decided that he could no longer be trusted with a car that topped 40 mph, I did fish with him one last time.

It was a summer evening with the windows down and the smell of hayfields whipping my face and Grandpa pressing the pedal of his road-hogging New Yorker to the floor. That big, blue boat just sailed, like nothing, up Route 122–hitting 60…70…80 mph to the top of the hill. Then click. He dropped her into neutral and we coasted all the way to the Baker Road, parked, and grabbed our rods.

Through the lush alfalfa we walked single file toward the stream, me a few steps behind out of deference. Grandpa let loose. Toot. Toot. Toot. Toooot. “There!” he said, like he’d made some inarguable point.

We got to his spot under the big willow: a deep, jade pool with tag alders leaning in, shading the cut banks. He settled in and barked, “Friend! Go try that riffle downstream. I’ve caught a lot of fish in that riffle.”

He had never caught a fish in that riffle. No one ever had. Not me nor any of my four brothers before me. The truth is that this was always less about teaching us kids to fish or having someone to fish with than it was about outfishing us and having someone to outfish. But he took us, and we learned. I scrambled a half mile downstream and worked my way up, catching trout the whole way, reaching Grandpa’s spot at dusk.

I sat on the cool bank next to him–he in his lawn chair, his rod on a forked stick. He used a Zebco close-faced combo, 17-pound-test, a couple of split shot, and a nightcrawler threaded onto a “s–t’n Japanese” hook. Whenever he lost a fish, he always blamed his “s–t’n Japanese” hooks, but he was too cheap to buy anything else.

I showed him the 15-inch brown I’d kept and told him about the other dozen or more smaller ones. For years, my brothers and I had been telling him about all the fish we’d caught and threw back. “Baahh!” he’d always say. They didn’t count. They might as well have been pretend fish, or maybe lies. He inspected my 15-incher and grunted.

Suddenly his rod was bouncing and waving. He grabbed it and reared back like he was snagged on a tire. I always wondered how many of the poor trout in Grandpa’s pool had been yanked lipless. But this time he was hooked fast. There was a heavy splash in the darkness. Grandpa lunged forward, cranking the Zebco, which complained loudly. There was a moment when it wasn’t clear who would win the fight, and then the fish flopped onto the bank and popped free.

“S–t’n Japanese hooks!” Grandpa yelled, as he took a swipe with his boot and miraculously connected, kicking the trout farther up the bank. I dove into the bracken ferns, feeling for the big brown in the dark, and finally held it up in the beam of Grandpa’s flashlight. It was a good one. All of 15 inches, probably 16.

Grandpa floored the big Chrysler and up the hill we sailed, bobbing smoothly home. He reached under his seat and came up with a white can printed with block letters: BEER. As we topped the hill, the needle touched 80, and he dropped her into neutral again just as the cop’s lights swirled in the rearview.

“Sir, do you know why I pulled you over?”

“Don’t you ‘sir’ me,” Grandpa answered, feeling good. “I know your father!”

“Look at this 17-incher I caught tonight.”

The cop let him off, and Grandpa gunned it, though only to 60 this time, and we coasted again down Route 122, right through the stoplight and into the corner gas station.

“How’d you do tonight, Mr. Hurteau?” the attendant asked.

“You always get the big ones.”

“Give me a dollar of unleaded, John,” Grandpa said–just enough to get him to the top of the hill twice tomorrow night. He’d be back to lie to John about his next catch.

“Yup, a good night,” Grandpa said, then turned and looked at me. “And, ah…my grandson here caught a big one, too.”

I knew how fast Grandpa’s fish could grow. But never my fish. If anything, mine shrank.

It was the best he could do.