Catch Bass and Bluegills–Then Enjoy a Warm Meal and Sip Cold Drinks Out On The Porch As we walk toward... 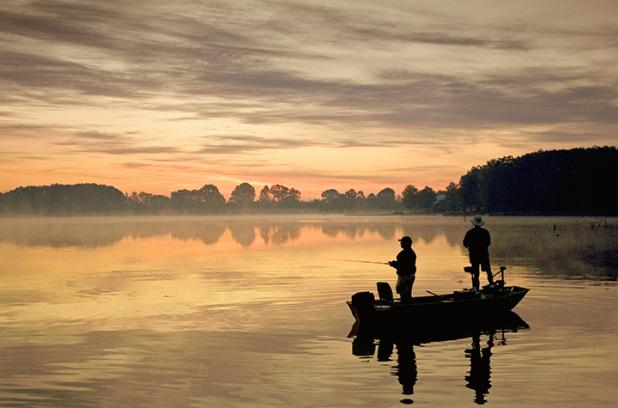 As we walk toward the inn, I can hear the occasional creaking of rocking chairs from the long front porch. It’s an old-fashioned kind of place; a horseshoe pit out back and a rolling lawn leading to boat docks out front, where I can see the shimmer of a northern bass lake through an ancient stand of white pines.

First things first. Right after we check in, I mosey into the dining room. Breakfast comes out at 6 a.m., and dinner service stops at 10 p.m., which means we can fish early and late, the best times for summer bass, without missing a meal. Perfect.

My wife hauls our luggage to a room down the hall while I launch our skiff at the boat ramp. By the time I get the boat tied to the dock and head back inside, she is already at the bar with a couple of cold longnecks. Like I said, first things first.
**
Early Risers**
By 6 a.m. we’ve grabbed some coffees to go from the dining room. Time to fish. We putt-putt our way across the lake to a shallow, weedy cove, expecting to find some surface-feeding bass before the sun gets high.

I cut the motor and the boat drifts quietly near some reeds and large, under-water boulders. I hand my wife a medium-weight spinning outfit rigged with fresh 8-pound mono. She ties on a floating Heddon Tiny Torpedo and starts casting.

That’s right, I say. Along the edge of the reeds. Make it look like a little frog. Slow down a little and wait longer between twitches. Give the bass time to take a look. She turns to roll her eyes at me. A fish rolls on the plug when she’s not looking. Her strike is too late, and the lure floats amid fading ripples.

So I do. She casts again and this time hooks a bass almost immediately. It’s a small fish but a fun fish. She releases the bass, then hands me the rod. “Your turn, Mister Smart Guy,” she says, smiling.

I make good on the deal after a couple of casts, landing another small bass. We trade the rod back and forth for the next couple of hours, picking up a dozen small largemouths along 200 yards of shoreline. By 9 a.m., the action slows as the morning sun intensifies, telling me most of the fish have moved deeper. Time for breakfast.

Afternoon Blues
Stuffed from waffles and bacon, we’re seated in the rocking chairs. “What’s next?” she asks. I explain that we could fish plastic worms deep along the outside edges of weedlines, where at least some bass have moved after the early bite. Or we could fish for bluegills, which might be a good bet considering that it’s within a couple of days of a full moon. The moon makes bluegills romantic, I say, so they start nesting and are easy to find. Sort of like me. She rolls her eyes again and opts for bluegills.

A low section of shoreline where steep hills aren’t plunging into the water promises an expanse of shallows. That’s spawning water in bluegill talk, so that’s where we go. Sure enough, there are saucer-shape bluegill beds along the bottom in water 2 to 3 feet deep that we can easily see, some with fish on them. Time for flyfishing practice.

I give her a 4-weight fly rod with a floating line and a 71⁄2-foot 4X leader–the short length makes for easy turnover in casting. She fastens on a small sponge-rubber spider with wiggly legs.

This time I know better than to advise. She casts fairly well and drops the bug next to one of the visible beds. A bluegill swims up and sucks in the spider, making a kind of kissing pop. After a dozen or so repeats, this starts to get old. Let’s catch some bigger ones, I say, and move the boat farther offshore, where the water’s about 6 feet deep. I add 3 feet of 5X fluorocarbon tippet to her leader, tie on a size 12 Tellico nymph made with wiggly hackle, and place one small split shot about a foot above the fly.

Cast out and let it sink for a while, I say, then retrieve in slow little twitches. And pardon the advice. Midway through her first retrieve the rod tip is yanked underwater. The rod bends deeper this time, and the fish takes longer to work to the surface. It’s a monster bluegill–all of 12 inches–and I land it with a net. I think of having it mounted. Then I think of eating it. Meanwhile, she lets it go. Oh, well.

By now it’s midafternoon, and the discussion topic is whether to have cocktails before or after this evening’s bass fishing.

“Both,” she says. Soon we’re back in the porch rockers, nursing frozen margaritas while I think about what a rough life this is.

Night Bites
The setting sun is kissing the treetops by the time we reach the outside edge of another weeded cove. We’ll be fishing until full darkness, which even in June’s long daylight means we can still make last call in the dining room.

I hand her a spinning outfit with 14-pound line this time because I’m hopeful of a bigger bass in the magic hour of near darkness. A 3⁄8-ounce, frog-pattern Jitterbug goes on the line. The lure’s noisy gurgling surface crawl should help bass find it in the half-light. I point out narrow lanes of open water between large lily-pad beds. Cast your lure right down those lanes, I say, so you can retrieve the plug close to fish cover without snagging. And remember that you’re a salesman, trying to convince a bass that your lure is good to eat. She doesn’t roll her eyes. Must be she’s getting serious.

So she casts and casts and casts. Don’t let your attention wander, I warn. Keep concentrating. By now I can just make out the glow of a rising moon behind the hilltops. Ka-chunk. I whip my head around to see my wife hard into a heavy fish. There’s lots of thrashing around until I can finally grab her line and lip the bass. Five pounds is my guess, as I hand her the fish to unhook and release. Not a giant but pretty darn good. We quit while we’re ahead and make the dining room with 10 minutes to spare.

Charcoal-grilled steaks arrive, and she raises a glass of Cabernet as a toast. “Here’s to weekends,” she says. Then adds with an evil grin, “And I think my fish was the biggest.”

Celebrate A Memorable Day On The Water

It even looks like the perfect summer drink. Tall, cold, and bubbly with a slice of lime, a gin and tonic is a tropical tradition dating back more than a century. British colonials in India and beyond mixed quinine with carbonated water as an antimalarial medication. Adding gin helped disguise quinine’s bitter taste. Modern tonic waters still contain quinine, but in much smaller, nonmedicinal amounts. It still works magic, though, when mixed with a proper London gin in an ice-filled glass. Then as now, a gin and tonic doesn’t actually repel mosquitoes. But after a couple you won’t mind the bites so much. –J.M.