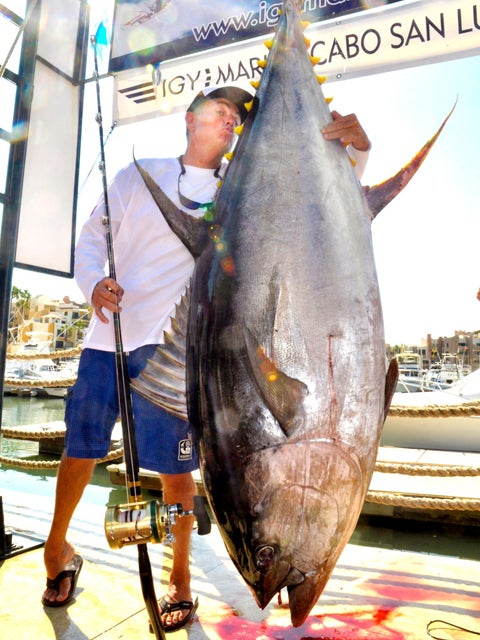 Given the magnitude of the accomplishment, many people wondered what Yocom would do with the fish. A picture is worth a thousand words, and there's no doubt he and his friends took enough snapshots to last a lifetime, but ultimately that's where the mementos end. "I'm not too upset I didn't make a mold or anything out of it. It was a really big fish, and to be honest, what am I going to do with something like that? It takes up a lot of wall space, so I'm not crying over spilled milk," Yocom says. "We were just happy to put the stress of the scale situation behind us, so when it was all said and done, we processed the fish. I couldn't be happier with the way it all worked out and don't need a giant replica to remind me of what we did.".
SHARE

On Sept. 18, 2012, the crew of the El Suertudo (translation: The Lucky Guy) and its owner, Guy Yocom, a business owner from Dana Point, Calif., plied pacific waters, approximately 180 miles off the shore of Cabo San Lucas, searching for a needle in a haystack. Driven by his vision of catching a world-record sized yellowfin tuna, Yocom was a man on a mission. But he nearly called off his quest when bait supplies dwindled and morale deteriorated. That’s when his rod doubled over.

“Our mindset on this trip was that we were going out to catch a world record,” says Yocom. “We caught some big fish the day or two before, and found some new areas, and the crew and everyone convinced me that if we spent the time out there, focused on catching big tuna, we could eventually land a record fish. So we went out with the idea of potentially landing the biggest yellowfin in the world.”

“Hurricane season is in full force around Cabo now, so we were waiting to go fishing between storms,” says Greg DiStefano, captain of El Suertudo. “The day before, we had some good fishing for yellowfin. We caught a 200 pounder, but it was tough. Our bait situation was terrible. We were running a bait kite with caballito and green jacks, and dead-drifting bait chunks cut from any smaller fish we caught–just using whatever we could.

“We left on Saturday and caught some fish on Monday and early Tuesday, but we were waiting for the high tide which was supposed to come around 9 a.m. Tuesday, but that time came and went, and we got some nice bites, but hadn’t landed anything noteworthy. We were running low on bait and I was a little disgusted and I looked at the crew and said, ‘You know what–maybe this isn’t the time. Let’s think about getting out of here,'” Yocom says. “But they all convinced me to stay out and at least finish up the last of our bait. Not five minutes later we were into a big fish.”

“I knew it was a big fish because I saw it take the bait. It came through and hit the bait hard, but at that moment, I didn’t know it was a record fish. I just knew it was a nice one. We were seeing some 60 and 80 pound fish coming through, so we knew there was the potential to catch a big fish,” DiStefano says.

“The rod was in a rod holder when the fish hit. So right off the bat, Guy clipped himself into a harness and settled and was ready for a long battle. Any time you have a tuna that’s over 200 pounds on the line, the person at the other end is going to get a workout, but we definitely didn’t know how big this fish was until it slid through the door.”

“Right away the fish started peeling line and running in all directions, and at one point it made a dart for a school of porpoise, and I honestly thought it was going to hit one and bust off. But it didn’t. It turned hard and I maneuvered the boat to coerce the fish away from the porpoise,” DiStefano says. “Guy was great, he just kept slow-and-easy tension on the fish and paced himself. I think there was 43 pounds of drag on the reel so he was putting quite a bit of pressure on the fish.”

“Maybe 30 minutes into the fight, the boat was going down swell, and the fish just seemed to stop. It wasn’t pulling any line and Guy seemed to make considerable gains on the reel. A few minutes later we started thinking the fish was dead because of how much line Guy was suddenly gaining back,” DiStefano says. “Not long after that, we could see the fish was tail wrapped. At some point in the fight, it lassoed itself so it wasn’t fighting like usual. I was nervy at that point because if the line was really tight from the corner of the mouth to the tail, the fish could snap the leader if it flexed its body enough. Marlin do that a lot.”

“When one of my guys went to put the first gaff in the fish, he barely touched the tail and it exploded in a fit and took off some line. The second time we tried to gaff it the same thing happened, but it took less line that the previous run. We finally got two gaffs in it on the third try. But then the fish broke one gaff when we pulled it up on the swim step of the boat! In the end we were very fortunate it tail wrapped the line. Otherwise, our 50-minute fight could have been much longer.”

“I first saw the fish about 50 yards out, but I never saw it again until it came on board because I was focused on the rod and reel and couldn’t see over the edge of the boat,” Yocom says. “I once gaffed one fish that weighed 350 pounds, so when I saw this fish, I knew that it was much bigger than that.”

After a small celebration, DiStefano and his crew had the wherewithal to measure and calculate the fish’s potential weight. When the tape measure stretched beyond the dimensions of the current world record, DiStefano says he knew they had something special.

“We knew it was a really nice fish. But because I was on the bridge, I didn’t see it until they slid it through the door and on the deck. Looking down, I had no doubt it was over 350 pounds, but when I climbed down and stood next to it, I upped my guess to over 400 pounds,” DiStefano says. “I memorized the measurements of the holding record yellowfin, so we got the tape out and started measuring–and our fish measured larger. It was 2 inches longer and had 2 ½ inches more girth. We calculated it up and estimated a range of 430 to 433 pounds. But because we were so far from shore, we caught it around noon, and didn’t have it on a scale until 8 a.m. the next morning. By that time, the fish lost three-quarters an inch off the girth.”

Shoreside, Yocom and DiStefano encountered their biggest hurdle in the pursuit of a world record–finding a certified scale to weigh the fish. One scale estimated the fish weighed 421.5 pounds, and another said 427.

“Minerva Saenz, owner of Minerva’s Baja Tackle in Cabo, is an International Game Fish Association (IGFA) weighmaster and she acted as a witness when we weighed the fish. Unfortunately, we were in a tight spot because the certification on her scale was expired. So, I called International Weighing Systems (800-881-9755) in San Diego because they make the ScaleMaster scales the IGFA uses for most of their measurements,” DiStefano says. “They explained to us that you can recertify a scale after weighing a fish–and if the scale needs an adjustment, the IGFA just adds or subtracts the difference from the final weight of the fish. In the end, it didn’t matter. We got Minerva’s scale to work and it was certified without needing any adjustments.”

“When it weighed in at 427, and we had the issues with all the scales, it put a lot more drama into the moment, that’s for sure,” Yocom says.

If upheld by the IGFA, Yocom’s tuna will supersede the current record of 405 pounds set in 2010 by a fish caught in Magdalena Bay. Before that, a 388-pound fish held the title since 1977.

“We filled out an IGFA application and affidavits that included the weight of the fish, the name of the angler, and photos of the catch and though the rules require a 50 foot sample of the line and the leader–we sent 70 feet just to be sure,” DiStefano says. “I just got an email this week that said everything we submitted was in order. So now we’re just waiting for them to review and let us know.”

“It’s an impressive fish, and so far, everything appears to be in good order with their application, the tackle, and the supporting documents [scale certification and testimonies],” Vitek says. “We will perform a line test within the next couple of days, and then will continue to push the application through our review process. Every record application submitted to the IGFA is not only reviewed by me, but also by our Conservation Director and our President. We should probably have a final ruling on this application around the end of December, since IGFA rules state that internationally submitted applications must wait a minimum of 90 days from the catch date, until being officially approved.”

But there’s more than just world-record notoriety hinging on the IGFA’s decision. As part of their Hook A Million promotion, Mustad Hooks offered up a potential $1 million purse to anyone landing a world-record fish in any of 10 fresh- and saltwater species categories between Oct. 1, 2011 and Sept. 30, 2012.

Yocom’s catch came in just before Mustad’s deadline, and if the IGFA deems it an official world record, he could potentially win the $1 million prize, dispersed in increments of $20,000 a year for 50 years.

In the flurry of interviews and attention that followed, Yocom was quick to point out that it wasn’t a solo accomplishment–he put full credit for the feat on the shoulders of his friends and crew.

“The crew put a lot of time into this effort. I don’t want anyone to think we were just trolling and this big fish came along. They’ve been working hard and getting ready for this challenge, and we felt good going out.”

Given the magnitude of the accomplishment, many people wondered what Yocom would do with the fish. A picture is worth a thousand words, and there’s no doubt he and his friends took enough snapshots to last a lifetime, but ultimately that’s where the mementos end.

“I’m not too upset I didn’t make a mold or anything out of it. It was a really big fish, and to be honest, what am I going to do with something like that? It takes up a lot of wall space, so I’m not crying over spilled milk,” Yocom says. “We were just happy to put the stress of the scale situation behind us, so when it was all said and done, we processed the fish. I couldn’t be happier with the way it all worked out and don’t need a giant replica to remind me of what we did.”