Favorite features, columns, and works by our late angling great, as chosen by Field & Stream editors and contributors. 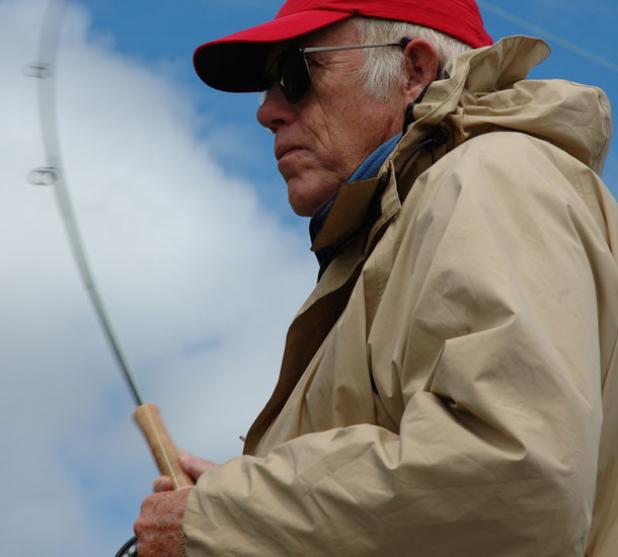 The Story I Liked…Whether I Knew It or Not

As a former magazine editor, John could often intuit the stories editors liked and needed. That ability resulted in his getting numerous story assignments over the years.

But John also was able to derive additional benefits.

The ’04 winter was coming to an end when I finally reached John at his Vermont home after getting his voicemail for more than a week. It turns out he’d been in Florida, bass fishing.
“Good for you,” I said. But I hadn’t assigned him a story on that topic, and I didn’t think any other staff editor had, either. Such trips don’t come cheap…and John was never, ever known as a spendthrift. “Why did you go?”

“To get out of the damn cold,” he said, as if I was dense. “It’s warm down there.” He gave me the highlights: A week-long, five-lake road trip with a good friend. Old-school fish camps. A few fat largemouths. Some laughs on the water under the bright Florida sun. A drink or two at night. All a thousand miles away from the dreary New England winter. “Well, I’ll write about it. You’ll see.”

“I know,” he said. “I wanted to go, and it’ll make a good story. You guys will like it, buy it, and reimburse my expenses. Don’t worry, it didn’t cost too much.”

That got my hackles up a bit. No one can tell me what story I’m going to like, and buy, before it’s even written.

The Essence of Merwin

John Merwin made an editor’s job easy. He had good ideas, and he knew how to execute them. When we started talking about sharing the contents of his fly fishing vest with the readers of Field & Stream, he was delighted. Most writers would have sent in a list of their favorite products to be photographed. But not John. He sent his entire vest. When I opened the UPS box at my desk, the smell of cigarettes wafted out. No doubt this was John’s vest. And while I knew what to expect (he had already sent in a detailed inventory), I spent the day digging in pockets, opening fly boxes, and examining the flotsam and jetsam he had collected. I found a few things that made me laugh, including a small roll of toilet paper, a flattened Milky Way, and some Advil (for fishing with editors). But mostly I realized I was looking at a lifetime of wisdom. _–David DiBenedetto, former Deputy Editor; editor in chief of Garden & Gun
_READ STORY

I smile every time I think about this story. Merwin’s writing could break down a complex skill into language a kid could understand, or transport your emotions to a special place he visited. He was an expert fisherman who could throw a fly line across a football field or coax a walleye from the depths that most of us couldn’t catch on a bet. And what does this guy–a writer at the top of his game–do? He goes to the hardware store, buys a $10 Barbie rod, and takes it deep-sea fishing. Sure there was a technical, well-delivered evaluation of a cheapo rod…but mostly, this was just a wonderful guy having a bunch of fun fishing–and reminding us all that we need to do the same. _–Scott Bestul, Field Editor
_READ STORY __

In the early 1990s, the editors of Field & Stream believed hunters and fishermen were not getting enough credit for their important contributions to the American economy. So, they commissioned a three-part series designed to examine at length just how much money sportsmen spend–and the jobs they support–on their leisure activities.

A couple of months into the project, the original writer floundered, and we were left with a vexing problem: a huge project with no one at the helm.

John Merwin pulled our fat out of the fire.

I had read his fascinating history of Vermont’s most famous river–the Battenkill; I not only admired the quality of the writing, but the cantankerous spunk of the writer as well–a man who was willing to debunk popular heroes. He dismissed revolutionary hero Ethan Allen by saying, “As a general case, historians over the past twenty years or so have taken an increasingly revisionist view, in the course of which any number of towering heroes have been revealed as clay-footed clods who happened to get lucky.” He also took the measure of Charles Orvis who, he said, “was ornery enough to float upstream.”

The book was unlike many others by outdoor writers, in that it was obviously done by someone who possessed major reporting skills.

Of all his talents, I think John was most proud of that. He had spent time as a small-town newspaperman, where he honed those skills, and no matter what he wrote, that ability to coax information out of people made his articles stand out from the crowd.

He also understood that big stories needed to be told through the eyes of ordinary people. And that’s just what he did with “The Sportsman’s Dollar,” making sure the long numbers-crunching narrative was peppered with short profiles of people who either spent the money or benefitted from it being spent. He corralled several Field & Stream contributing editors, told them to find these folks, and then incorporated their stories into the article. It was an old newspaper trick–and it worked like a charm.

John also had a profound impact on me. He was known for his gruff manner, but underneath it beat the heart of a gifted teacher. When we first flyfished together on the Delaware River, I flailed the water to a froth–all without catching a fish.

When I later complained about the rod I was using, John looked at me and said, “It’s not the rod; it’s you.” He quickly decided the main problem wasn’t a lack of technical skill, but my utter lack of patience. To cure me of that, he put me on a pool at 3 p.m. He said, before he departed, “The first rises should be about 8. Don’t fish until then.”

He forced me to slow down, to think of fishing as a form of hunting, to sit quietly and watch nature unfold around me.

A couple of years later, in Colorado, while we took a break along a stream bank after a long morning of trout fishing, I took a short nap–something I never would have done in my early years. When I opened my eyes, he said, “Good. You’re learning.”

John was never in a hurry to catch a fish. He didn’t wait, like the rest of us, for a trout to rise. He watched. He found a comfy spot on the bank, lit a smoke, stretched out, and watched–and kept watching, long after I was up and casting at the first piddling splashes, even after the good fish were dimpling steadily. Then he got up, ambled over without a ripple, and caught the best trout in the pool.

John was a first-rate magazine writer, surpassed by no one in his field. But honestly, I like his books better. The long form suited him. No need to hurry to make his point. He could get comfy, light a smoke, stretch his prose out a bit, and show you–really show you–what he saw from those stream banks and lakeshores and mid-river rocks. Here are four examples from two of my favorite books of John’s: The New American Trout Fishing and The Battenkill. _****–Dave Hurteau, Deputy Editor
_READ STORY__

The Trout Stream of Consciousness

I spent one summer during college working at fly shop on the Missouri River in Montana. In July and August, I would set my alarm an hour or two earlier than normal so I could fish the morning trico hatch. Clouds of thousands of tiny bugs would hover over the banks, while the river boiled with monster trout. It was a feeding frenzy unlike anything I’d ever seen–before or since. A couple of summers after that, I landed an internship at Field & Stream, and this feature of John’s was one of the first stories I was asked to read. Of course, the writing was perfect and his expertise was unmatched, but what I loved most about this piece–then and today–was how John’s words transported me back to those early and epic mornings on the river. I’ve yet to return to Montana. But at least I have this story. _–Colin Kearns, Deputy Editor
_READ STORY__

What I always loved about John’s writing was its fearlessness. He was never one to paint something in a bright light that he didn’t feel deserved it, or for the sake of it being the “in thing.” Some people could take that as John talking down to a reader, but I saw it more as a stern method of teaching that really made you think. Though it’s not one of John’s great epic tales, no example of this sticks out more clearly than this short how-to story. At its core, the piece is simple: two tips for catching trout on nymphs without the aid of strike indicator. But if you read John’s introduction, which includes his thoughts on fishing with indicators, you may never want to use one again, and might actually feel foolish about leaning on them in the past. Harsh? A little. But ever since I read this story, I won’t tie on an indicator unless I feel there’s no other way to present a nymph through a particular run effectively. _–Joe Cermele, Fishing Editor
_READ STORY__