Big Bass: Alabama Striper May Be a Landlocked World Record

James R. Bramlett shattered a 54-year-old Alabama state record with this 70-pound striped bass he caught on February 28. The... 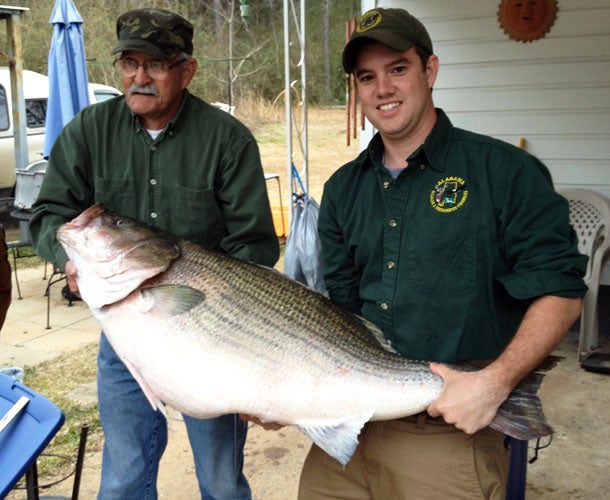 James R. Bramlett shattered a 54-year-old Alabama state record with this 70-pound striped bass he caught on February 28. The Dora resident, 65, may have also eclipsed the IGFA all-tackle world record for a landlocked striper when he hauled in this monster on the upper Bankhead Reservoir.

Heath Haley, a district fisheries biologist for Alabama Wildlife and Freshwater Fisheries who viewed the fish shortly after it was caught, says the pending state record (which was weighed on a certified scale in Sumiton and now awaits only the completion of paper work) is remarkable by Alabama standards. Bramlett’s catch beat the prior record–which had stood since June 28, 1959–by 15 pounds.

“It’s definitely uncommon,” Haley says. “This fish certainly, in my opinion, was an anomaly. It’s a very fat, chunky fish. The previous record being 55 pounds, the fact that it hasn’t been broken since the 1950s, it’s just incredible that not only he broke it, but he shattered it. You just don’t see them that big that often.” Haley measured the fish at 45 ½ inches long, with a girth of 37 ¾ inches.

The freshwater striper very well may be remarkable by world standards, as well. The International Game Fish Association all-tackle world record for landlocked striped bass is a 67-pound, 8-ounce fish caught May 7, 1992, by Hank Ferguson in Los Banos, Calif.

Bramlett was fishing near the Gorgas Steam Plant on the Upper Bankhead, an impoundment on the Black Warrior River in north-central Alabama not far from his home. An experienced angler, he was targeting one of his favorite spots on the river that day at the urging of his wife, Janice, who will undergo surgery soon and wanted Bramlett to get in one last fishing trip before she goes into the hospital. After seeing a big fish roll on the surface, he cast a 10-inch gizzard shad on a 6.0 Mustad hook to the spot. He landed the striper after a 20-minute fight, and his first phone call was to Janice. (Bramlett was unavailable for an interview this week due to his wife’s impending surgery, but Janice said he was excited by his catch and the attention it is generating. “He’s got a lot on his plate right now,” she said.)

If the fish does become a world record, as expected, it couldn’t happen to a nicer guy, Haley says. “He’s very humble, very generous. He does a lot of fishing, and he showed me some photos of big catfish he’s caught in the area. I’d love to spend a day on the water with him!”