Trout Tips: How To Hook The Biggest Breeder in the Stream

When you’re 10 years old, catching a breeder trout is the holy grail of angling achievement. At least that’s how... 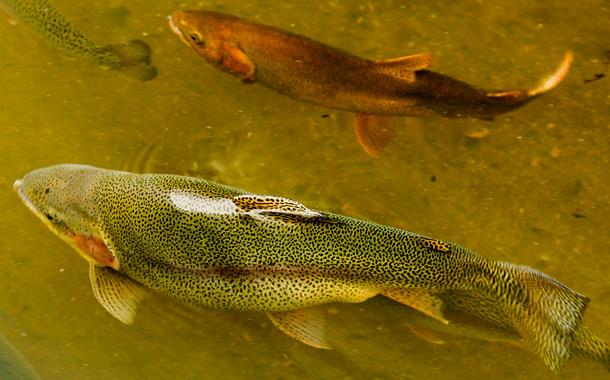 When you’re 10 years old, catching a breeder trout is the holy grail of angling achievement. At least that’s how I felt every opening day of the trout season as I was growing up in New Jersey. Many fishermen could catch a limit of average-size stockers on that day, but the ability to catch a breeder seemed to be reserved for the trout angling elite.

These early-season trophies are large female trout, typically 2 to 5 years old, weighing 3 to 8 pounds, that hatcheries no longer use for egg production. They have served their time, if you will, so they are released into streams and rivers where they become trophies worthy of some serious parking-lot bragging rights.

While you don’t have to be an elite angler to score a big breeder, a bit more planning and strategy than you’d put into a normal stocker hunt can increase your chances of hooking into one. I figured that out at age 14, when I caught my first 5-pound breeder brook trout by learning to cover more water and fishing those holes not flanked by a crowd of anglers. According to Jim Sciascia, the chief of information and education at the New Jersey Division of Fish and Wildlife, my teenage intuition was definitely on the right track.

Sciascia is a devoted flyfisherman who chases the same 600,000 trout he helps stock every spring, approximately 5,000 of which are breeders. All states with stocking programs eventually release their brood fish, but given that New Jersey’s stocked streams are rather crowded and the number of breeders released is relatively low, an angler who’s skilled enough to catch breeders here can catch them anywhere. Sciascia’s insight from both the stocking and the angling perspective will give you a head start on your home waters during the early-spring trout season:

Scout It Out
Sciascia recommends visiting the river you plan to fish before the season opens to figure out exactly where the fish were stocked. Look for easy access points close to roads, where stocking trucks and workers can reach the water. “If the water in that spot is skinny and fast, a breeder is not going to stay there, but smaller fish might,” Sciascia says. “Breeders don’t want to fight heavy current, so if there’s no deeper, slower water right at the stock point, you already know any breeders released there will have moved up or downstream.”

Look Closely
You might then assume any breeders in an area will flock to the closest big, deep hole. But according to Sciascia, a breeder is content to sit in a small depression or eddy big enough for only one fish. That’s why you shouldn’t pass up any pockets or short runs that have only a bit more depth than the main river. “Two years in a row I saw a breeder caught behind the same rock,” Sciascia says. “The spot didn’t look like much, but it was just the right depth and flow to hold a big fish.”

Don’t Dumb Down
“Breeders are often released during the first round of stocking prior to the opener,” notes Sciascia. “That gives them more time to acclimate to the river.” By the early season, breeders will have had plenty of opportunity to feed on natural forage. That’s not to say they’ll never eat something that looks like a hatchery pellet, but don’t expect a breeder to grab the first piece of corn that drifts past.

Cast A Real Meal
“Early in the season, a breeder is more likely to react to a larger lure than is a smaller fish,” Sciascia says. It may take some willpower, but fishing exclusively with lures such as 4-inch stickbaits or long bunny strip flies will up your chances of hooking a breeder, while everyone else is working the small fish with worms and tiny spinners.