Stickbaits for Trout: Match Your Lure to the Size of Your River 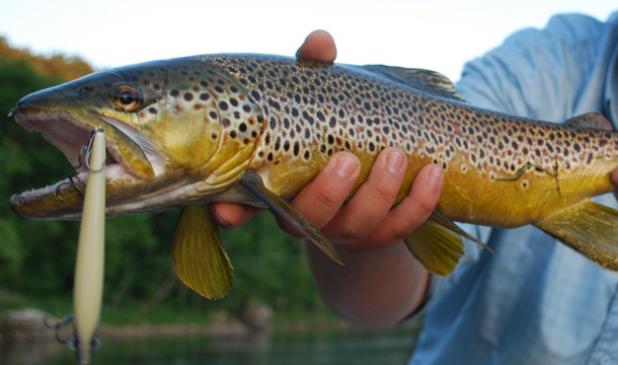 Growing up, I pretty much threw nothing but spinners during the spring trout season. My dad, my grandfather, and I were Panther Martin men. It wasn’t until later that I realized everyone on my local rivers was throwing in-line spinners, so I started experimenting. These days, I catch more and bigger trout on stickbaits. The trick to being successful with these lures is making sure you match the style of stick to the water you’re fishing. These three have come through for me in all kinds of rivers. Choose your weapon wisely–and you’ll outfish the spinner crowd.

Like to target those clear pocket-water streams you could almost jump across? You need a stickbait that won’t splash down hard and can be worked effectively on a light rod. The 2-inch floating Yo-Zuri Pins Minnow ($7; yo-zuri.com) only dives to 1 foot, so it doesn’t hang up on the bottom often, and its thin-profile lip gives it a tight wiggle even when barely twitched. That’s important because you may only have a short pocket to fish and can’t wait for the lip to grab the current. Work the Pins through seams and eddies with the rod tip high, twitching it gently, and watch this flashy little bait disappear.

Put me on a stream with a little more width, depth variation, and structure, and I’m throwing a 3 1/8-inch Rapala X-Rap ($9.50; rapala.com). What’s great about this lure is its ability to suspend at any depth. Twitch it once and it’ll hover just below the surface. Give it a few good swipes and it’ll hug the bottom to 5 feet. Often that first jerk, after a good, long pause, will get a brown trout to strike. I find the X-Rap most effective when cast upstream, jerked to depth, and allowed to sweep downstream with an occasional twitch through likely holding water or around boulders and deadfalls.

Big-river trout hunters, especially in the South, might be married to their Smithwick Rattlin’ Rogues, but I’m hitched to the 4 1/2-inch XCalibur EEratic Shad ($8; lurenet.com). Ever since putting a hurt on some heavy trout in Arkansas’s White River last spring, I have thrown this stick everywhere from western Pennsylvania to upstate New York. The swifter the current, the more erraticly it moves on the twitch, yet it’s not tiring to work, which lets you cover more water without turning your arms to Jell-O. This lure shines in rivers with even flows and deeper runs where the trout hold in the main current instead of orienting to boulders, eddies, and fallen trees.