On April 28, 2013, Michael Eisele of Heiligenhafen, Germany was enjoying a beautiful, albeit slow day off an island in... 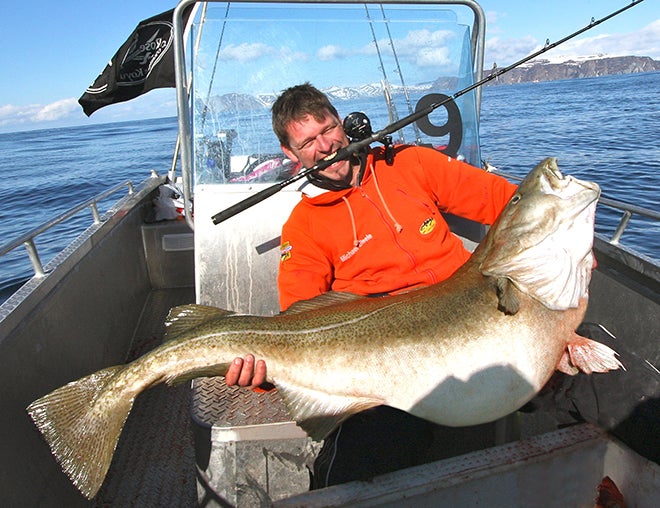 On April 28, 2013, Michael Eisele of Heiligenhafen, Germany was enjoying a beautiful, albeit slow day off an island in Norway, fishing for Atlantic cod. Just before calling it quits, Eisele felt a tug on his line, set the hook and endured a 30 minute battle with a 103.6-pound cod–a fish currently poised to eclipse the International Game Fish Association’s (IGFA) 44-year-old world record by nearly five pounds.

News of Eisele’s catch spread fast and the ensuing days have brought him newfound fame, especially in European fishing circles. He’s no stranger to fishing or the possibility of catching a big one on any outing. Thirty years ago, his father, Dieter Eisele, started a fishing tackle firm, Dieter Eisele Sea-Fishing, in Bruchweg, Oldenburg Germany. Even at a young age, Eisele began accompanying his father on big-fish quests.

“I felt like I was involved in my father’s company from the beginning. He took me to the sea, often to the Baltic or north of Norway to fish for Atlantic species,” Eisele says. “When I finished school 25 years ago, I started working with him, and it was great to mix my passion with a professional job. Now, our company’s jigs, Select-Pilks, are known all over Europe, and we currently develop, produce and sell over 3,000 other sea-fishing products with the Dieter-Eisele name.”

Eisele now manages his father’s tackle company, but outside the office walls, his passion for fishing is as strong as ever, and he returns to the waters off Norway at every opportunity. In fact, it was just a simple holiday adventure that resulted in his recent notoriety.

“One of our company’s specialties is organizing customer sea-fishing trips in the waters north of Norway’s coast. The plan is to get them into the biggest fish of their life, a cod weighing 50 pounds or more,” Eisele says. “On this particular day, we were looking a few miles off the island of Soroya. Two friends and I found fish hanging off the edge of a shallow, underwater shelf where the cod like to move up and spawn, about 10 miles from the town of Breivikbotn. We used sonar to find the right depth and the fish, but the rest relies on experience–knowing how to get in front of the fish and the feeling of one on the line.”

Late in the afternoon, Eisele hooked a fish that, at first, seemed no different than the hundreds of cod he’d caught in the past. But when everyone on the boat got a first glimpse of the five-footer, they knew it was special.

“When we got this fish up to the boat, we (the guide, customers, and Eisele) talked about what to do. Do we continue fishing? Do we head back to the harbor? Of course, my two friends wanted to keep fishing because they could see two other big red dots on the sonar we thought were fish!” Eisele says laughing. “On the way back, we met a guide friend, Darius, on the dock, and he said it was the biggest cod he’d ever seen. An hour later, we weighed the fish and learned it was the biggest fish caught in Norway. It wasn’t until sometime after that, that we looked up the IGFA record and saw that is was the biggest [cod] caught by any angler in the world. I was in shock. All I could say was, ‘Wow!'”

Word of Eisele’s catch quickly spread through the small coastal community, and residents crowded the dock to get a look. Before the evening was over, Eisele was receiving phone calls from all over the world with congratulations and questions–so many in fact, Eisele says he had to take a break from fishing for the rest of the week just to field inquiries.

Eisele has been in touch with the IGFA and is in the process of submitting his application, line samples, and all other necessities required to have the fish officially declared a world record, but even without the official title, many already recognize it as the biggest cod caught on a rod and reel.

“I donated the fish to the fisheries museum in Bergen, Norway, and they’re taking care of it. They will exhibit the fish and give me a prapparat [a replica of the fish],” Eisele says. “I feel like I’ve told the same story 1,000 times, but I’m happy. I’ve enjoyed all the attention and accolades from the catch these days, but later I hope to sit down and figure out if I did anything differently and how I might be able to apply it to the success of our business.”