Small video cameras designed to mount onto just about anything have flooded the market in the past few years. None... 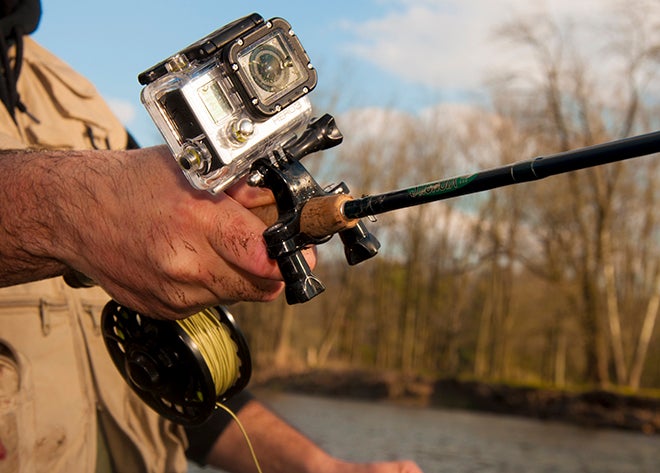 Small video cameras designed to mount onto just about anything have flooded the market in the past few years. None of these cameras is more popular than the GoPro (starting at $200), and the fishing industry has responded by making angler-specific accessories available at tackle shops. Underwater videos of fish being released and angler-point-of-view fish fights are routine on YouTube, as the inexpensive, waterproof cameras are easy to use. But I’ve produced a lot of fishing videos, and I can say that strapping a camera to your head and hitting the Record button will not create a quality video. Also, with a little creative thinking, you can use the camera that documents your trophy catch to help you catch more trophies.

Avoid the Shakes
Every fisherman I know who has recently purchased a GoPro also coughed up the extra $15 for a head-strap mount. But unless you keep your noggin perfectly straight while recording your casts or a fish fight, you end up with shaky footage. With a GoPro mounted on your chest, the focus remains on the rod and your hands. You can pay the $40 for the chest mount, or you can strap the head mount around an old flyfishing chest pack. It works just as well.

One of the most common videos online is of a fish swimming away. This shot is also one of the most frequently botched. Step one for a successful release shot is making sure the sun is at your back. If the fish is backlit, it will turn out dark and featureless in the video. Next, get the camera underwater and rolling before the fish is submerged for release. Dunking the camera afterward can cause the fish to spook and wriggle free. Make sure whoever is holding the fish has a good grip and can hold the catch still underwater long enough for you to adjust the position of the camera. Finally, follow the fish as it swims off.

A View From Below
Since the GoPro was first introduced in 2010, Mustad’s Jeff Pierce has considered the camera a stock piece of his fishing arsenal. Not only does Pierce use one to document his fishing trips all over the world, but he also has learned to use the GoPro as his underwater eyes with a TrollPro housing ($150; troll​pro.com), which allows fishermen to tow the camera behind the boat.

“I’ll just slowly drag the camera for a while and review the footage later to see the species of fish we were marking on sonar,” Pierce says. “I’ve also used it to see how fish react to specific lures and to ID bottom substrate and vegetation type.”

Pierce once trolled his GoPro in a billfish spread off Mexico. No fish hit his rigs that day, but when he watched the footage later, he learned that several fish had come up from deep to look at his spread but wouldn’t eat.

You also can simply mount your camera on a stick, submerge it in a trout run or pond flat, and let the memory card fill up while you fish elsewhere. You might be surprised by what it records, and more importantly, what you can learn from it. I once let a GoPro run in a pool on a tiny brookie stream, and found out why I never saw a fish that day: They slinked under the rock ledges every time I walked within 20 feet. The next day I changed to a 13-foot leader, kept a longer distance from the spot I wanted to fish, and caught a few beautiful mountain trout on small streamers.