Nearly 50 applications for ****__world record fish_ **were received at the International Gamefish Association headquarters last month, including these nine... 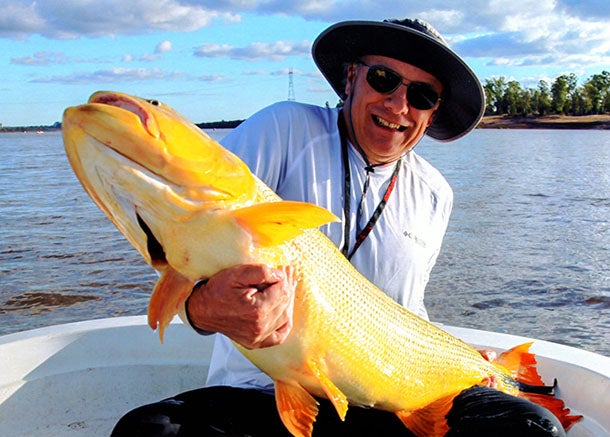 Nearly 50 applications for ****__world record fish_ **were received at the International Gamefish Association headquarters last month, including these nine saltwater and four freshwater records, plus an application for the new 50-pound Dolphinfish Trophy Club._ **

A Brazilian family of anglers made out well on a trip to Argentina in May. Three members of the de Almeida clan recorded potential record catches on beautifully colored, but ill-tempered dorado. Pictured here is Manuela De Almeida with her 29-pound, 13-ounce catch. Scroll down to see the records caught by her father and brother on the same trip.

German angler Michael Eisele hauled in this 103-pound, 10-ounce Atlantic cod (Gadus morhus) near Soroya, Norway on April 28, 2013. He was using a custom soft platic/jig-head combo. It took him 36 minutes to get the cod on the boat.

California angler Chris Wheaton will soon join this trophy fish club with a 53-pound, 9-ounce dolphinfish he caught during the Fishin’ for the Mission tournament.

Tasmanian angler Jonah Lee Yick landed this 236-pound, 12-ounce southern bluefin tuna (Thunnus maccoyii) on April 30, 2013. He was trolling a Tasman Prowler lure and it took him an hour and 15 minutes to reel in the fish. The current IGFA record is 234 pounds 12 ounces.

Guilherme de Almeida joined his sister with a record catch of his own. He caught this 38-pound, 5-ounce dorado on a Rapala plug.

This 87-pound, 3-ounce great barracuda (Sphyraena barracuda) inhaled a musky plug that Christian Loranger was trolling near Christmas Island on Sept. 23, 2012. It took him two hours to boat the fish. The current record is 85 pounds.

Maureen Klause was fishing with Capt. Ricky Wheeler in the Delaware Bay on May 27 when she hooked up with this fish. The 61-pound, 13-ounce black drum (Pogonias cromis) ate a clam Klause was using as bait. It took her 20 minutes to reel it in. The current record is 40 pounds 8 ounces.

Capt. Gary Boyer caught this 36-pound California yellowtail (Seriola lalandi) on a custom sardine fly. He was fishing off Los Barriles on March 20. The fish fought him for 45 minutes. The current IGFA record is 31 pounds.

Dotty Ballantyne recently caught and released a 22-pound, 8-ounce tarpon (Megalops atlanticus). She was fishing with Capt. Chris McCreedy out of Key West on May 22. She fought the fish for 20 minutes after it ate a custom tarpon fly.

Jan Forszpaniak caught this 27.55-inch (70 cm) pollock (Pollachius virens) on a diamond jig. He was fishing with Capt. Greg Sears on May 10. It took him seven minutes to land the fish. The pollock was released after some photos and measurements. The current IGFA record is vacant.

Lydia Nicolson spent an hour battle this 81-pound, 15-ounce Atlantic sailfish (Istiophorus platypterus) on 6-pound line. The fish was caught on a skirted ballyhoo. She was fishing off Lobito, Angola on March 8.

Conrad A. Proctor landed this 18-pound tiger muskellunge (Esox masquinongy x Esox lucius) on a Yamamoto worm. He was fising on Lake Luena, Michigan on May 17. It took Proctor 30 minutes to reel in the fish, which he released alive after properly documenting the catch. The current IGFA record is 15 pounds.

Tacito de Almeida caught this 38-pound, 6-ounce dorado on a Rapala plug. He was fishing with local guide Alejandro Differding on the Uruguay River. The current record is 37 pounds. The fish was released alive.

Wally Baines caught this 38.97-inch (99 cm) bonnethead shark (Sphyrna tiburo) on a blue crab. He was fishing in north Florida on May 26. It took him 10 minutes to land the shark and he released it after he took some measurements and photos.