Author’s Note: Captain Travis Rolan is a good friend of mine and being a captain for so long, he has... 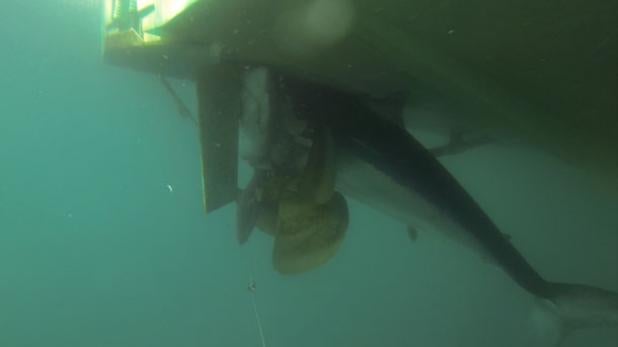 Author’s Note: Captain Travis Rolan is a good friend of mine and being a captain for so long, he has his share of fish stories. When I noticed the pictures he posted to his Facebook account on Sunday afternoon, I had to call him and hear the whole story. Once you see the pictures you’ll know why I rushed to call him.

From under the boat, Capt. Travis Rolan snapped this image with his GoPro as he began his first attempt to pry the fish from the screws.

“It was exactly what you want to find when you’re fishing in a shark tournament,” Rolan said. “You could see blue sharks coming out of the water to feed on the whale and it looked like a scene from a National Geographic documentary.”

Hooking up with several blues, and a smaller mako they made the decision to leave the carcass. After running a couple times, Blinky 4 found a three-degree temperature break where the blue water meets green, which is ideal fishing grounds. Immediately they caught and released several small blue sharks. It didn’t take long for the big predators to find their chum line.

“With the drag set to 25 pounds and peeling off fast — we all knew we had a big shark on the line,” Rolan said. “We didn’t know how big, but after it broke water a few times we knew it was a mako — and a big one.”

The infamous mako with a 50-gallon drum in the background provides a glimpse of the fish’s overall size.

Nockler battled the fish for nearly 30 minutes and when Rolan leaned over the side to gaff the giant shark, the fish took another plunge directly below the transom. As D’Angelo touched the throttle to bump the vessel forward, the mako ascended directly into the screws.

The decks went from cheering — knowing they had a shark that would place, possibly win the tournament and the nearly $63,000 purse — to silence. That’s when Rolan noticed the leader drifting beneath the transom. Donning a mask and leaning through the tuna door to look underwater, Nockler was the first to notice the real problem.

Nine-foot mako wedged between both screws and the rudder forced Rolan to get into the water to dislodge the fish.

The shark had hit the screws in a near vertical ascent which then wedged it between the two screws and rudder. It hit with such force that the engines safety mechanism had kicked in and shut the engines down. The crew now realized that after chumming for four hours, catching multiple sharks including this possible 10-foot monster — someone was going to have to get in the water to dislodge the fish from the screws. The National Geographic-like feeding frenzy still fresh on their minds made this jump overboard more than intimidating.

“I’ve been a captain for 21 years, guided in Key West for 15 and spent a lot of time in the water — but this was the most nerve-racking 45-minute swim I’ve ever made,” Rolan said.

Once Rolan was in the water the scene was surreal and he was happy to have his GoPro camera. He used the gaff to wedge between the head and rudder to attempt to pry the fish loose, but it was to no avail.

“Man, I literally had my feet on the hull pulling on the gaff trying to pull the shark towards me — which wasn’t smart looking back. The whole time I’m looking over my shoulder and below me,” he said. “Not only had we chummed this area for hours, but the amount of blood spilling from this shark was unreal, and I was in the middle of it.”

Capt. Tom D’Angelo, owner and captain of Blinky 4 holds up the mangled mako.

Luckily, another vessel, Mikey Likes It, showed up on the scene. Rolan attached a rope to the shark on one side and the other boat pulled it free from starboard, but only half pulled free. He then had to get back in the water and tie a rope to the tail and Mikey Likes It pulled from the opposite side to completely free the shark from the screws.

The crew offloads the 9-foot mako.

The mako ended up being 9 feet long and weighing 294 pounds, minus a large portion of the fish’s neck and insides. Unfortunately, the mauled mako couldn’t be entered in the tournament. The winning weight was 296 total pounds. Combined with their smaller mako, Blinky 4’s crew estimated their total weight at 325 to 360 pounds.