Powerless at Sea: How a Spare Fuse Became a Lifesaver

**It should have been a routine family fishing trip–the author and his wife with three of their young children jigging... 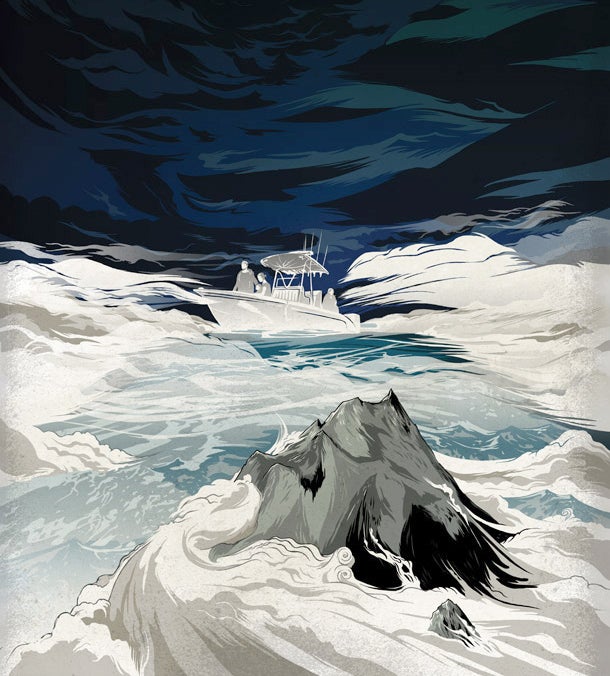 **It should have been a routine family fishing trip–the author and his wife with three of their young children jigging for squid in familiar waters. But when the boat’s electrical system went dead, they were left stranded in a thick nighttime fog with no immediate certainty of how to get home. **

We were confident as we eased off the dock and headed down-channel, bound in the evening for Nebraska Shoals. We knew this trip would require caution, but trips to sea always do. The forecast predicted fog but otherwise contained little reason for concern. Seas were gentle, almost flat. It was mid May and a weeknight, which meant boat traffic would be light. The run out was familiar, a straight shot from the jetty that did not cross shipping lanes. And we considered ourselves well equipped. The boat was outfitted with radar, dual engines, dual GPS units, and dual radios, and stocked with a ditch bag ready for many of the common at-sea mishaps.

Running the boat by darkness was not new to us; roughly half of our fishing is done after sunset, often deep into the night. And so all was in order for an early-season trip. My wife, two of our sons, our daughter, and I planned to anchor up for squid in about 35 feet of water at the shoals’ edge. Elizabeth had turned 8 in April. This was her first season on the water at night, and throughout winter her questions about night fishing had signaled she was eager for the chance–and equally eager to ensure that her brothers did not think that the mysteries of our patch of the Atlantic were only for boys.

The run out passed as expected, although the combination of warm spring air and water clinging to its winter chill conspired to pump fog as thick as we had ever seen. Another boat that pushed out the gap in the seawall ahead was swallowed up as surely as if she had slipped behind a curtain. I pulled the throttle back, settling our 26-footer into a putter, and studied the images on the radar. The screen showed two boats within 2 miles: a larger one and the boat just ahead. We watched their headings and chose an azimuth a few degrees north of their courses, which would keep us clear. Only then did I push the boat onto plane for the ride to where we had left the squid a couple of nights before. We took the run slow. My sons Jack and Mick stood lookout for floating debris or buoys and ­lobster-​pot lines. My eyes moved the loop: compass, radar, chart, sea. A few miles later we came off plane. The sonar immediately marked life suspended in the water column below. Good signs came in a pair. Looking over the gunwale, we saw a tightly packed formation of squid drift past on the surface, inches under, ghostlike and gliding. Squid on top even before setting up? “We’re here,” I said.

The kids were jigging as the anchor line paid out.

As I flipped switches to turn on the halogen lights on the T-top, planning to draw up more bait, there was a flash, like the pop of an old bulb. Then blackness. The console was dark–radar, GPS, sounders, radios, the works. I looked to the bow. The running lights were out, too. So much for the redundancy built into the boat. The electrical system was dead. There was only one of those, and much else depended on it.

“What was that, Daddy?” Elizabeth asked. There was nervousness in her voice. “What happened?”

We were a few miles off the beach, in gathering darkness, closed off by fog. A checklist appeared in my head. Toolbox? Yes. Flashlight? Sure. Replacement fuses? I remembered sorting and packing them and stuffing them in sealable plastic bags. That was late last fall. Had they made the boat in spring? I admitted to myself silently: Maybe not.

Elizabeth and the boys jigged while I feigned good cheer. The next disappointment came from the console. The box that holds keys, wallet, and a small waterproof flashlight contained no flashlight. I had taken it out for work but had not put it back. It was stuffed in a flak jacket in a shed at home, beside the headlamp that belonged on the boat, too.

In kitting out for work, I had partially stripped the boat. And then, in the rush to gather the kids after school and the hurry to fill a cooler with meat, I had neglected a habit–the pre-trip checklist, which does little good when you are already at sea. What all of this meant was that when I started digging around inside the console, checking the electrical system and trying to ferret out the problem, I would be feeling the way by Braille. And when the time came to pull fuses to inspect, I wasn’t sure my eyes could tell good from bad.

The boat was dripping wet. In fog this thick, restoring the electric current meant preventing the trip from descending into minor disaster. The engines were still idling, and we could try to head back without radar. But such a move carried risks. Visibility was perhaps 50 feet. The gap in the seawall would be difficult to find in the fog, even if we dead-reckoned precisely, which was unlikely in a hard-pulling current on a run of several miles. And if we came in at the wrong angle we could end up on rocks. The horn and lights on the jetties flanking the channel signaled the final approaches, but thoughts of them were hardly reassuring. I knew from my many late-night runs to the dock in weather and fog that the horn’s blasts could be hard to pinpoint in these conditions, and that the red and green lights wouldn’t be visible unless we were already there. And as we neared the channel we might encounter commercial fishing traffic or one of the Block Island ferries–something we would not want to do in darkness on a boat without running lights, much less in this kind of soup.

There were other options. The forecast did not call for wind, so we were probably safe from the elements. We could sit at anchor overnight, and then make the run back midmorning, the earliest to expect a fog like this to lift. But midmorning was 15 damp hours away, and our boat was an open boat. There was no cabin. Sleeping on a wet deck was no way to encourage Elizabeth to jump in the pickup next time I said I was headed for the dock. And some of us would have to remain awake all night to guard against a collision, ready to blast the air horn if we heard a boat steaming near.

Boat Restoration
Once under the console, I fumbled about and located the blown fuse near the battery cables, en route to the panel where power branched out. And inside the toolbox I found that the replacement fuses were where they were supposed to be. Soon the lights came on. The boat’s electronics booted and blinked back to life. My sons, in their fifth year of nights on the water, had remained confident and fishing throughout, and Elizabeth had read their body language and followed their lead. After the lights shone for an hour, a school of small bluefish set up on the squid that had gathered round the boat, and before heading in we had a mixed cooler, heavy with meat.

The trip was a success.

But was it really? I was disquieted. I knew that by leaving behind a flashlight and not being certain that I had a full complement of replacement fuses, I had put a trip–and my family–at risk. I also had come face-to-face with the limits of boat-based redundancy. The dual radios and dual GPS units were safeguards against an equipment failure, but not against an electrical system failure, which could take out all of the electronics at once. My mechanic later said that the combined load of the lights, electronics, and a running wash-down pump, which sucks more power when first used after a long storage, had probably blown the fuse; whatever the problem was, it was not re-creatable when we ran tests a few days later at the dock.

All the more reason to revisit the backup: the ditch bag. One day my family and I may face a more daunting set of technical problems–and in conditions where sitting tight is not an option. And then the bag had better be stocked smarter than it was last May.

Our ditch bag had held what we might need to cluster together and reach out to the world for help: flares, water-activated strobes, whistles, an air horn, a handheld waterproof floating radio, and an EPIRB locator and distress beacon. It also had a first-aid kit and a few small bottles of water. But it didn’t contain some of what we might need long before having to tread water: most notably a battery-powered, handheld GPS.

This was an oversight. Had we been short a spare fuse, or had the electrical failure been rooted in a more pernicious and less reversible cause, then a handheld GPS with a coastal navigation chart would have helped us navigate with confidence through the fog to the western opening in the Harbor of Refuge seawall. I use handheld GPS units at work as a war correspondent, and often depend on them. Why didn’t I have one on the boat? The paired units on the console had given me a false confidence.

When I started shopping, I realized how shortsighted I had been. Well-reviewed handhelds with bright screens were available for less than $500, and top-tier units for not much more. That’s a small price for safety, or even confidence.

A few days later, back out for more of the spring harvest with my family, I had a unit aboard, and was testing it–one more layer of redundancy in the effort, while fishing often and hard, to get safety at sea right.