Ed Kalinowski, of New Meadows, Idaho, has good reason to be glad that he and a buddy decided to go... 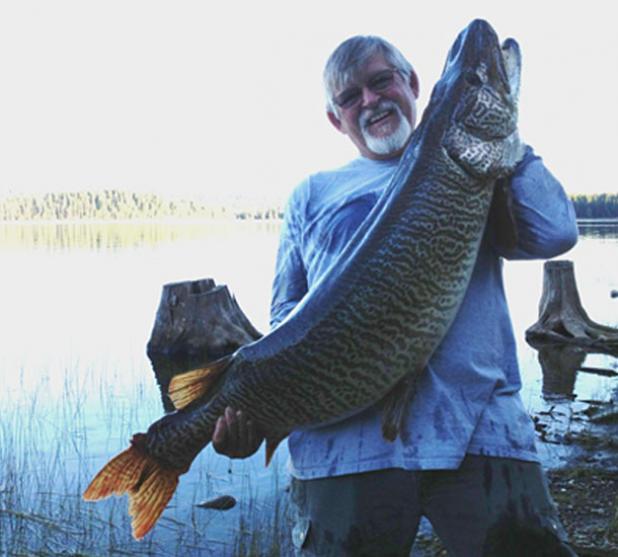 Ed Kalinowski, of New Meadows, Idaho, has good reason to be glad that he and a buddy decided to go fishing for a few hours after school. The principal of the local school landed the new world-record tiger muskie.

Kalinowski was fishing on Little Payette Lake on Aug. 6, 2013. He was slow-trolling a copper spinner–a local brand of trout lure named Neon Magic–from a 14-foot boat when the 44.26-pound fish hit.

“At first I thought I had snagged a log, but when the fish started shaking its head I knew it wasn’t a snag,” he said.

Fortunately, he had just spooled new 12-pound-test monofilament line onto his bait-casting reel and tied a fresh knot.

“The fish fought for about 15 minutes before we first saw it,” he said. “And when we did, we couldn’t believe the size. It kept turning the boat around and around, 360 degrees, and took nearly an hour to land.”

When the fish finally tired and came to the boat, Kalinowski saw that the single treble hook on the lure was holding the fish by just one barb, hooked at the tip of the fish’s snout. The men didn’t have a landing net so Kalinowki’s fishing buddy tried to boat the fish by placing a loop of rope around its tail and lifting. But the rope kept slipping off.

“That’s when I unhooked the fish in the water and we both grabbed an end and lifted it into the boat,” said Kalinowski. “I’m not quite sure how we did it.”

The record tiger muskie–a cross between a muskie and a northern pike–officially weighed 44.26 pounds and measured 52.5 inches in length, with a girth of 25 inches. The fish is believed to have been stocked in the lake in 1999 (the fish is approximately 13 and a half years old). It had teeth one-half to three-quarters of an inch long.

The tiger muskie was examined by a fishery biologist with the Idaho Fish & Game Commission before being certified as a new state record. The fish was certified as a new world record by the Modern Day Muskie World Record Program. For more information about Kalinowski’s record catch, go to www.modernmuskierecords.org.