Sometimes the best road trips are the ones you don’t think through too far ahead. My wife’s cousins Jed and... 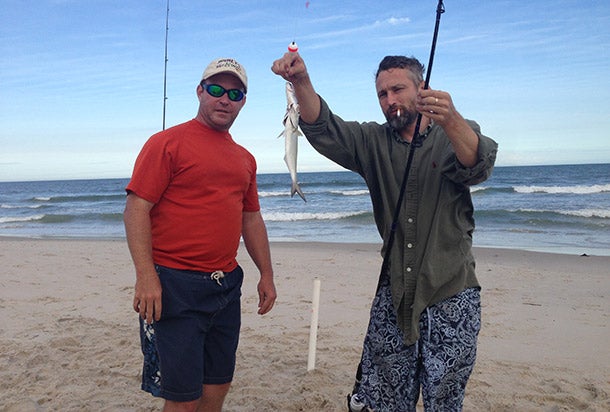 Sometimes the best road trips are the ones you don’t think through too far ahead. My wife’s cousins Jed and Rob and I took one of these two weeks ago, after we had to cancel a trip to the Adirondacks in upstate New York. Since we still had the weekend open, we decided last minute to head to Assateague Island, Maryland, which was closer to where the boys lived, though none of us had ever been there. I picked them up from their house in Baltimore on Friday afternoon and we drove four hours to the Eastern Shore, where we set up our tents for a day and a half of fishing from the surf.

Sometimes you get screwed when you leave a trip to luck like this. I remember one three-day jaunt I took back in college, fishing my way from Michigan to D.C. to start a summer job with Trout Unlimited. I pulled in blind one evening to a town called Ohiopyle in southwest Pennsylvania, and found a local bar there with a bunch of kayaks out front. I stopped in for a beer and to ask about the best spot for a quick guerilla overnight.

Inside were a group of guides who all slept in tents that they’d pitched on the side of the hill behind the bar. After a few drinks and a couple of games of foosball they invited me to throw down my own next to theirs. But for some reason I didn’t have a flashlight, so I had to set up on the hill in the dark. I woke the next morning rested and happy, loving the clean mountain air, then realized I’d pitched my tent in the middle of a soft, wide bed of fresh poison ivy. I spent the first two weeks on that job desperately trying not to scratch my ankles, worried the TU guys would think I had fleas.

But that kind of bad luck is rare. Most surprises on a vagabond road trip are of the pleasant kind, and even the bad stuff usually turns out to have a silver lining.

We pulled into Assateague at dusk on a Friday, thinking we’d park on the OSV beach there, fish, and camp out next to our truck. But when we bought our permit the rangers told us they’d ticket anybody the found asleep. Too many people had woken over the years to find their rigs buried under an incoming tide. Fortunately, the federal campground on the island had one last site available due to a last-minute cancellation. It was a pretty little spot in a wet, grassy meadow, just behind a line of barrier dunes. We set up, fished the beach until midnight, then crashed in the meadow until sunrise. I woke up in the morning to the sound of cropping grass and unzipped my tent flap to find a herd of wild ponies grazing in a fog all around me.

Later that day we made a trip into a nearby town to escape the midday heat and stumbled onto a national Fiddler’s Convention. A 9-year-old boy was rocking the theme to Mario Bros. on his banjo from a grandstand on Main St. as we flip-flopped our sand into town. We bought barbecued pork boats from a street vendor and ate ice cream under a shop awning as we watched and waited for the sun to burn less hot.

Serendipity can be a funny thing. If we’d done our research none of this – the fair, the ponies, or even the little bluefish we caught and cooked that night – would have been a surprise. But going in blind made it feel like we’d discovered it all on our own. Those memories will stay sharp a lot longer than if we’d known what was coming.

My friend James and I pulled off another quick trip without much planning this past weekend. We both live on Long Island (he’s in Brooklyn, I’m in Babylon) but for some reason neither of us had ever been fishing in Mecca — Montauk — which is probably the best place to fish for striped bass in the country. We planned to fish from our kayaks, but had no idea where to launch them, so we stopped off at our local yak shop (captainkayak.com) to ask for advice on the way. As it turned out, the owner of the shop was in Montauk already, fishing with a buddy on his vacation. I’d fished with Jerry before, so I called him up when we arrived to get some intel. He invited us out on his 23-foot center console, and we were happy to take him up on the offer.

The next day on Jerry’s boat we lucked into the best blitz I’ve ever fished. For two and a half hours we cast Deadly Dicks into acres of 40-inch bass and 15-pound bluefish that were blasting finger mullet clear out of the water. There were no other boats within a mile of that blitz, a miracle in itself when you’re fishing a place as crowded as Montauk gets. The video below, shot with an iPhone, doesn’t do the fishing justice but does give you an idea of the pandemonium involved when four guys are all fighting and landing big fish from a small boat at the same time.

I’ll take serendipity over knowing what’s coming any day of the week.