Surf Park: Cape Hatteras Has The Best Surf Fishing On The Atlantic Coast

Photo by Stephen Alvarez/National Geographic/Getty Images The first fish hits the second cast, and it is on. The bluefish corral... 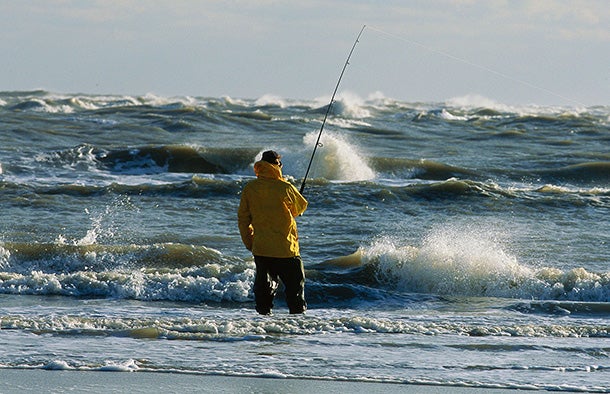 The first fish hits the second cast, and it is on. The bluefish corral bait toward shore, and there are so many finger mullet that each receding wave leaves little fish flopping on sand. False albacore break just out of casting range–out where the dark shapes of diving pelicans and terns jab through the dawn like Homer’s shades of the dead. It’s still dusky enough to catch the Cape Hatteras Light beacon flashing overhead, but the eastern sky is absolutely on fire.

Twenty yards down the beach my buddy Kevin McCabe is shaking his head. “I haven’t seen bait like this in 30 years,” he hollers. And he would know. McCabe’s back porch is a half mile from the Cape Hatteras Light, where the Outer Banks of North Carolina jut like an angry jaw 30 miles from mainland in the Atlantic Ocean. That puts him square in the crosshairs of fish migrating north and south, and right in the middle of the best surf fishing on the Atlantic coast, and McCabe is on the Hatteras beaches five days a week. “There’s a mile of menhaden out in front of us. Football fields of bait. Far as you can see.”

We land two dozen bluefish in the first light of dawn, including half a cooler of 2-pound eaters. Massive cumulous clouds boil up over the horizon, marking the warm waters of the Gulf Stream. As the light comes up, the strikes start to wind down, from every cast to every other to every third spoon ripped through the salt. I work in a nice fish, walking backward to drag it through the surf. We’ve kept plenty for bait strips and bluefish salad, so this one’s going back. Then, suddenly, as I hold the fish to work the hook from its lips, something stops me cold.

The fish sags in my hand, its flanks washed in the gold light of dawn, its wild eye a liquid black marble. In my palm, I feel a steady thump-thump-thump. At first I think it’s my own pulse, but it’s not. It’s the heartbeat of the bluefish.

Of all the fish I’ve ever held, I don’t think I’ve ever felt a pulse. I pull the fish close to my face, and try to shut out the cries of gulls and moan of surf and whine of wind in the rod guides. Thump-thump-thump. Clear as a bell. It’s a steady cadence, a rhythm in harmony with the beat of everything around me: the waves that wash around my shins, the tides that push the fish to shore, the sweep of the lighthouse beacon. All of the wild Atlantic shore, right there in the palm of my hand.

Along the Atlantic coast, even hardcore hunters try to shoehorn in a weekend or two of surf fishing in fall. The Cape Hatteras beaches, along the Outer Banks, are a top pick for slinging shrimp and heavy metal. Like any place where monstrous numbers of fish have a habit of pulsing through, it can get ugly. When the red drum are thick at Hatteras Point, the trucks are parked door handle to door handle, and you’d better know how to work a fish through the surf without tangling up with your neighbors. By and large, though, this is congenial fishing, and there’s plenty of beach for everybody. You don’t even have to be a monogamous salt angler to fit in. Show up in duck waders with heavy bass gear and you’re good, brother. Put it right under the curl, there. That’s where we’re smacking ’em.

Part of surf fishing’s easy-as-you-please charm, in fact, is just that: You can make it as complicated as you want it to be. Add kayaks, camping gear, trucks, or live-bait rigs. Even stripped down to its essentials, surf fishing has a pull that endures for a lifetime. My kids cut their fishing teeth on bottom rigs with small hooks and pinkie-nail-size bits of bait. I’ll fish that way still, wet to the waist, trying to cipher the difference between a grab and a tap and a shudder in the line that could be a flounder slurping it in.

And then there’s November at Hatteras, when the water can go from nothing to blowing up with fish–40-pound reds and 4-pound trout, flounder and blues and Spanish mackerel in knee-deep water. McCabe and I pile into his truck and head south down the beach, away from the lighthouse, past dog walkers, shell seekers, and a motley assortment of other anglers. Some are slouched in beach chairs, eyeballs on surf rods held aloft in sand spikes. Some are slow-jigging for flounder or fast-jigging for bluefish. Others stalk the waves with cast nets. That’s the beauty of this time of year, in this kind of place. There’s no one way to catch a fish.

We take our time and cherry-pick sloughs and rips and holes. Figuring out the surf is about as much fun as finding the fish. In the last hour of the falling tide, we see a slot of foam-topped water on the inside of two submerged bars. It’s as classic a surf fishing spot as we can imagine. “That is epic,” McCabe says, and we fire off leadhead jigs tipped with wedge strips of fresh bluefish belly. Flounder come flopping out of the hole, followed by bluefish and more flounder and blues once again.

Fifty feet up the beach, an old man lands a pair of red drum inside of two minutes. He holds each one overhead, over the water, at arm’s length, a thanksgiving to the late autumn surf, to the keeper of the rhythm.