How to Catch Monster Walleyes on Hometown Waters

Countless destination lakes have well-known reputations for producing giant walleyes. Still, a good majority of the biggest fish ever documented... 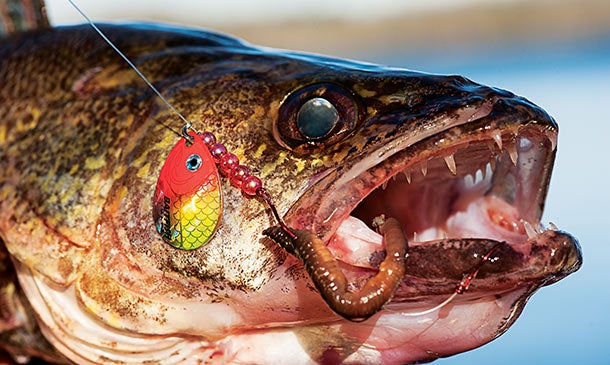 Countless destination lakes have well-known reputations for producing giant walleyes. Still, a good majority of the biggest fish ever documented came from smaller lakes and reservoirs. With much less water to sort through, you can actually have a better shot at catching the ‘eye of a lifetime on these smaller bodies. In many cases, the reason you don’t hear about big walleyes in that lake up the street isn’t because they don’t exist, but because they aren’t targeted.

Running in the Mud

Walleyes in lakes will spawn in a couple of waves separated by just a few days when the water temperature rises into the 40s. What you want to look for is mudflats in the 15- to 30-foot depth range. These flats often become recovery areas where the big females catch their breath after dropping eggs. Postspawn fish typically spend a few days glued to the bottom, and they rarely eat. But once they regain their strength, they start to rise in the water column and put on the feedbag.

My go-to rig for trolling these fish is a spinner-and-nightcrawler combo because it’s effective throughout the water column. Unlike crankbaits that require lots of line to reach the proper depth, spinners get down with less scope, and less line ups the chance of keeping a big fish pinned. They are also very effective when trolled super slowly, which is often required in the early season. Run one rig 5 to 10 feet off the bottom, one midwater, one in the top 10 feet, and you’re covered.

Where it’s legal, targeting small rivers in spring gives anglers without a boat the best shot at a trophy because big walleyes usually spend the rest of the season in the depths. This time of year, the fish migrate to tributaries to spawn and hang in eddies. Most guys cast jigs and twistertails, but I like to use a Carolina-rigged twister on a floating jighead (below). This allows the hook to stay off the bottom and thwarts hangups. It also keeps the lure in a fish’s face longer.

I’ll swap the traditional sliding sinker with split shot crimped to the tag end in the knot that joins the main line and barrel swivel. If you snag, the shot should just slide off.–R.R.

“Growing up, I spent a lot of time wading the Wisconsin River, catching small walleyes on jigs. One day I switched to a crankbait and caught a giant literally at my feet. That’s when I realized I had been casting over their heads all those years. The biggest fish were extremely shallow in spring.” –Joe Okada, pro walleye angler, Madison, Wis.

When walleyes are young, small shiners are usually the star dish on their menu. As they get bigger, gizzard shad and other large protein-rich baitfish become preferred meals. If all the baitfish in the system are either very small or very large, walleyes may not have what they need to grow big.

Some of the best smaller lakes and reservoirs are those that get pounded by anglers chasing crappies and bass, because many of those anglers don’t spend much time fishing where the walleyes live. Therefore, walleyes often get the least amount of pressure and can grow bigger.

Lakes that have a pedigree for giant ‘eyes also tend to have areas with 30 or more feet of depth. Big, spooky walleyes find comfort in knowing they can slip into the deep whenever they choose, and deep-water lakes also generally have larger baitfish.