Any pro anglers are sponsored by rod, reel, and lure companies. Then there’s Zach Miller and his band of fishing... 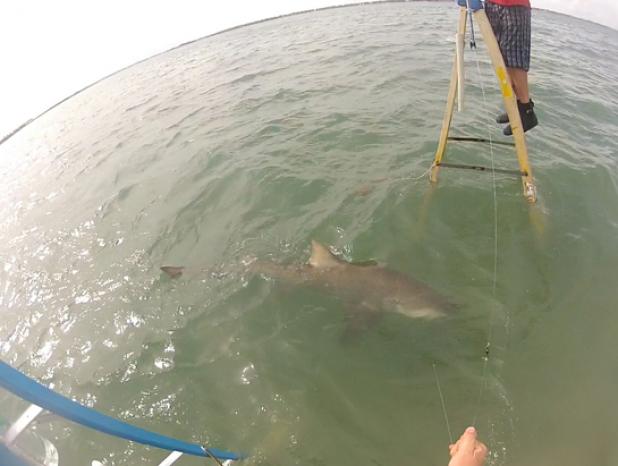 The store’s huge ladder assortment enabled Team Rebel (team​rebel​fishing.com) to find the perfect shark fishing platform to plant on the flats of the Indian River. Standing on a ladder and chumming in big sharks sounds crazy, but Miller and friends have found that the tactic results in more fish. And they’re not alone.
**
A Leg (and Everything Else) Up**
Miller used to chase sharks from a kayak, chumming them out of the deep channels onto the knee-deep flats. But kayaks have their flaws. “You can’t see far ahead of yourself in a kayak,” Miller says. “I also just got tired of the sleigh rides when I hooked a big fish.” Planting a ladder on the flats was an idea he had been toying with for a while, figuring the elevation would allow him to see approaching sharks from a greater distance. He’d fight the fish from the ladder and only have to stand in the water once the fish was tired out.

Soon Miller learned that not just any ladder would do. “An 8-foot fiberglass ladder is best,” he says. “It won’t rust, and it has good stability. We screw rod holders to the frame, add 1x4s to the legs for more surface area so the ladder doesn’t sink into the sand too deeply, and opt for a steel top to sit on.” So far the biggest shark they’ve caught is a 71⁄2-foot lemon. But according to Miller, it’s the little sharks–not the monsters–that you have to worry about.

“Most ladders have only three or four support rungs on the nonstep side,” he explains. “We’d have small sharks swimming right between them and getting tangled or shaking the ladder. Our ladders have six support rungs to stop that from happening. The sharks can still swim in from the side, but the extra rungs help.” When I asked him what he plans to do when he or one of his crew hooks a 500-pound bull from a ladder, his answer was simple: “We’re gonna catch it.”

Cutts, Above
Rob Anderson joined the legion of anglers who fly cast from ladders planted along the sandy beaches of Pyramid Lake in the 1990s. In spring, Lahontan cutthroat trout cruise along the shallows in search of moving water for spawning, and anglers use ladders to keep themselves out of the icy waters.

“Back in the day, guys would just wade out up to their bellies and cast to the dropoff,” says Anderson, a guide based in Reno, Nevada (pyramid​lake​flyfishing.com). “It’s often windy on Pyramid, so you’re dodging waves. At some point, someone started standing on a milk crate to get out of the water. Today, that has evolved into fishermen making custom ladders and platforms complete with chairs on top.”

The popularity of ladder fishing on Pyramid has spread to anglers at other local lakes who sight-cast to brown trout, says Anderson. And I know several flats fishermen who climb ladders to spot bonefish and permit in water deeper than knee height. If you’re heading out to look for bedding bass at the pond or pike cruising the shallows after ice-out, throwing a ladder in the truck isn’t a bad idea. Even if you don’t plant it in the water, gaining elevation farther back from the shoreline can help you spot fish without being right on top of them. Then it’s up to you to put on the sneak.