Thing to Do in May: Go Flyfishing for Bluegills on a Float Tube or Pontoon Boat

Photo by Barry and Cathy Beck I’m four days late, but it’s the best I can do. Every spring I... 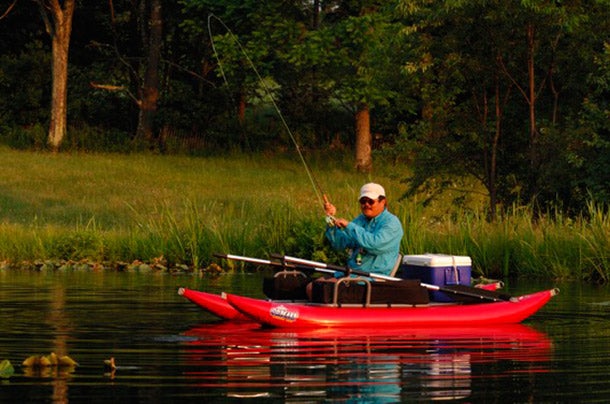 Photo by Barry and Cathy Beck

I’m four days late, but it’s the best I can do. Every spring I plan to fish the full moon of May, the peak of a magical week when spawning bluegills simply can’t keep their mouths shut.

Popping bugs and sinking ants, doves cooing in the pines, damselflies dipping–flyfishing for bedding bream is one of those annual gotta-dos. When it’s on, you can hardly make a cast without hooking up. Even when it’s slow, you’re going home with fish enough for a small family fry.

And this year there’s a bonus: I recently stumbled across my ancient float tube and fins, wadded up in a dank corner of the basement, behind the kitty litter box and a plastic tote of emergency supplies that dated to the Y2K scare. Skimmed over with cobwebs, the float tube’s outer fabric was a bit mildewed but seemed sound enough. The inner tube, though, was honeycombed with surface rot. It took a serious patch job of rubber cement and Gorilla tape before it held air overnight, but after that I was set. I’d spent some fine spring hours in that old tube, pulling in bluegills, redbreasts, and the occasional shellcracker with its clam-cracking gullet. I can’t imagine why I’ve gone so long without shipping off.

It’s become harder to find the time for such a simple pleasure. So I drive to a buddy’s farm pond, four days of the full moon late but early enough for sunrise. I slip into the water and hold tight to the bank at first, fingers crossed. Not a single bubble hisses out of the tube. I flutter-kick for the south bank, hoping there is still time to catch some of that old bluegill magic.

It takes me a while to get my crosshairs on the fish. I work a small cove first, but the fish are not where I thought they would be–in the shallows near the sunny bank where the water trickles in from the hardwoods. Kicking around the pond, I smell the bream beds–an oily musk, strawberries mashed up with fish slime. The cream-colored craters are like elephant tracks in the shallows. These fish are cluster-bedded in front of a grassy fringe of green reeds, beside a blown-down pine where a kingfisher perches. We eye each other, friendly competitors. I work the outside edges first, fan-casting left to right, trying to pick off the big females that hang back from the beds. (See p. 36 for ­spawning-​bluegill tactics in big water.)

Now another bluegill smacks the popping bug with a slashing strike, its blue-black back and dorsal fin arcing like a porpoise. I strip in a bit of slack and let the rod work. The float tube spins away from the bank as the bluegill heads for deep water, and I can’t help but laugh out loud. When the bite is on in a bluegill pond, it is cast after cast. I go six for six before the commotion puts the fish down and the bite flattens out, but that’s no problem. A few flutter kicks take me to new water, new bream beds, new fish that, for a few blissful days in May, just can’t help themselves.

I’m as happy to be back in this old float tube as anything. It’s such a peculiar sensation: being in the water, but not really, dry as toast in ­stocking-foot waders. Years ago I used to sneak the float tube into a state park pond that was posted against swimming and boating, and confound the rangers that whistled me over for a talking-to.

No, sir, I’m not swimming, not with these waders on. And no, sir, you’re right. I’m not really boating, either.

They’d shake their heads and wave me back into the pond. Now, with my eyes just a couple of feet from the pond surface, I share the perspective of the damselfly, the kingfisher, the slider turtles sunning on the bank. I cast the popper, let the rings dissipate, count to 10, and take in tiny little strips of fly line–not to move the bug so much as to keep the line taut as the wind pushes me almost imperceptibly toward the bream beds, like another leaf on the pond.

The next bluegill is a beauty. It runs for the deep water and leaves me tangled in my fish stringer, which is weighed down with browns and blues and the flash of orange bellies.

This big old copperhead bream is the granddaddy so far. When I bring him to hand, it’s all I can do to get my fingers around the fish. His flanks have gone deep purple, and there’s a hump on his head that tells me he’s seen his share of full April moons. This sucker is an inch and a quarter thick, easy, by far the biggest bluegill I’ve ever pulled out of this pond. He goes on the stringer. Two more keepers and then it’s all for fun and games.

My white popper is working like magic, but I’m not one to leave well enough alone. In my fly box a sinking yellow-jacket pattern catches my eye. It’s a bit meatier than my standard-issue popping bug. Meatier and a touch sinister-looking, which might be double-trouble for a fat bream guarding a bed full of babies. The fly is also quite the dapper fellow, spruced up in a tiny black tuxedo with a yellow cummerbund.

That thought seals the deal. I pull out the yellow jacket, snug down the knot. I may be a few days late to the party, but the morning has all the feel of a special occasion.

Traditional hook disgorgers such as hemostats and needle-nose pliers can tear up popper bodies and wings, damage hooks, and nick tippets and knots. The best hook removal tool for small-mouthed bream is a simple wooden Popsicle stick. Whittle one end of the stick to a width of 1⁄4 inch. Place it on a hard wooden surface such as a picnic table, and use a knife blade to cut a V-notch into the narrowed end. Now just slide the V-notch down the line to the hook eye, and pop the popper free.