Photo by Brian Grossenbacher Ten years ago, anyone who wanted to catch a carp pierced two kernels of corn on... 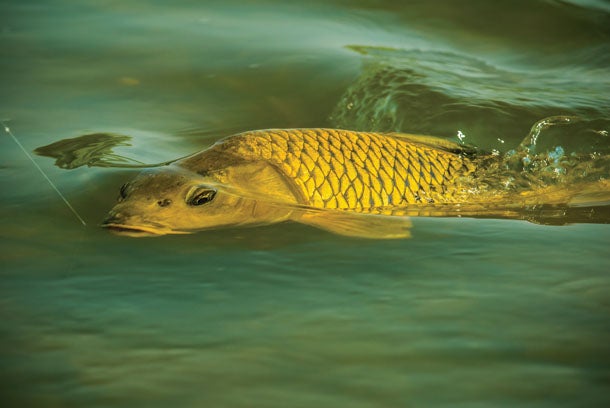 Ten years ago, anyone who wanted to catch a carp pierced two kernels of corn on a hook, cast out, and waited. Today, as chasing these bottom feeders gains more popularity in the U.S., fishermen are threading boilies onto highly technical -European-​style rigs, chumming the area with specially formulated meal, setting supersensitive bite alarms, and waiting. Overkill? Maybe, but what’s not overkill is using a specialty spinning rod for carp, even if you don’t buy anything else tied to Euro-style fishing. Daiwa and St. Croix have added carp rods to their catalogs over the last few years, which signals an increasing demand for carp-specific gear. And these rods aren’t just glorified Ugly Stiks—they provide unique advantages for hooking and fighting big carp.

American Muscle
Lee Young is the captain of the first ever American team that will compete in the World Carp Championship in Romania this year. He is also the man who designed the first line of carp spinning rods sold by St. Croix, which appeared in 2011. According to Young, who was born in England and now lives in Wisconsin, there is actually more benefit to using a Euro-style carp rod—which ranges in length from 9 to 12 feet—in the U.S. than in Europe. That’s because while our carp share DNA with those overseas, they are completely different animals.

“European carp are raised on pellets, then sold to private lakes when they reach a certain size,” Young says. “Their fish might get bigger, but they’re fat and hand-fed, so they don’t really fight. U.S. carp are wild, and they don’t respect anglers. They try to rip your arms off.”

As Young puts it, a long rod with a powerful midsection helps you keep a fish’s head up and turn it when it’s “running down that bank lined with submerged shopping carts.” That same monster that’s burning the drag, however, might have slurped up your bait with extreme subtlety. That’s why carp rod blanks—unlike surf rod blanks—have a slim taper from end to end. You’ll detect even the most delicate pickups by way of the extra-sensitive tips.

Longer and Softer
During the week, Frank Heater is a truck mechanic. On the weekends, he is a carp hunter who ditched his 7-foot rods six years ago and went full Euro-style. He recently was named the state chair for the New Jersey chapter of Carp Anglers Group, one of the biggest online carp fishing communities in the country. Heater claims that many of the carp he’s caught might not have made it to the net without a carp rod.

“An extra 3 or 4 feet of rod is a big advantage, especially when you’re landing fish,” says Heater, who typically fishes solo. “A longer rod lets you pull it closer without putting as much strain on the line. You have more rod to lift high and move over your shoulder to draw the fish closer to the net.”

Aside from fighting and landing advantages, Heater points out that carp rods aid in bait delivery. Generally rated for lines in the 8- to 25-pound-test range, and weights from 1⁄2 to 6 ounces, they are slower to create catapulting action, which helps send heavy rigs greater distances with gentler lobs. This casting style is necessary to keep crumbly, mushy carp baits from flying off the hook (an advantage catfishermen should note, as well).

Daiwa’s Maddragon rods (top) go for $60; St. Croix’s Avid Carp series starts at more than four times that amount. Such rods enable you to cast delicate baits and detect subtle bites—and then really put the screws to that 20-​pounder in the drainage pond behind your local Costco.