Photos by Colin & Brian Kearns Well, it’s about time. Bigger trout finally started to bite. Or to be honest,... 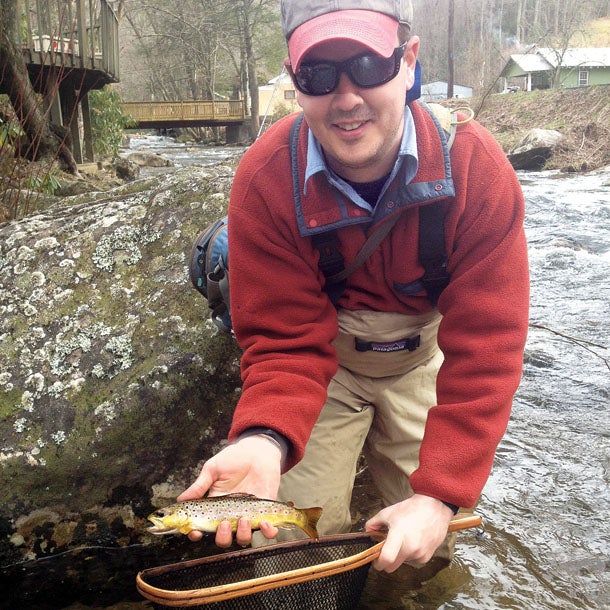 Well, it’s about time. Bigger trout finally started to bite. Or to be honest, I finally started to catch them. I released the 12-inch rainbow and glanced downstream to see if Brian was watching. He’d missed it, focused instead on fishing the pool just above the spillway. I shouted for him to join me, but the cascading water below him drowned my voice. Already two days into our four-day road trip through Tennessee trout country–a trip Brian and I had been planning for months–I was still searching for the perfect moment to fish beside my big brother.

When Brian left the spillway hole for a rest on the bank, I joined him. “Take my spot,” I said. He was reluctant, then eventually agreed, but when he went back into the river, he waded too far upstream–past where the trout were rising. Afraid we’d lose the spot, I reclaimed the hole and caught another trout. Then another. Brian was close enough now that he could see what he’d been missing. And close enough to hear my voice: “Get over here!” That might’ve been the first time I ever gave my big brother an order.

Brian trudged downstream, and I grasped his leader to retie his rig. He’d never caught a trout on a dry fly, so I walked him through the presentation. He’s a solid caster and he quickly figured out how to mend his fly line downstream. Still, the first few strikes surprised him, and he was too slow on the hooksets. I sensed him getting discouraged, as if each missed fish edged him closer to his last chance. “Don’t worry,” I told him. “You’ve got this.” We still had time.

Brian’s focus sharpened. He unrolled a cast, then crouched low to track his drifting flies from the natural bluewings. A trout rose. Water sprayed off his tightened line. He landed the fish, and we shared a high-five and a hug before trading swigs of bourbon from the flask in my pack.

When the bite slowed–after Brian had caught several more trout–I changed his flies, and soon his rod buckled deeper than it had with the other fish. He fought the trout perfectly and glided it into my net. At about 14 inches the fish was bigger than any he or I had caught on the trip, and the screaming-bright pink on its cheeks and sides left little doubt: “This is a wild fish,” I said. I gave Brian his fish so he could release it. Afterward, he stopped to catch his breath.

“That’s the best fish I’ve ever caught,” he said.

“Why?” I asked, expecting him to say because it was the biggest.

Brian kept catching the rising trout. He no longer needed my help, but I stuck around nonetheless. I was content just to dress or change his flies, anything to keep fishing beside my big brother. As things turned out, this hatch on the South Holston River was the only really good bite he and I would experience on the trip. A storm would raise and muddy the other rivers we’d been planning to fish.

Road trips never go exactly as planned. At least in my experience, though, it’s precisely the moments you cannot plan for–a timeless hatch, your brother’s first wild trout, whiskey on the river–that make a trip a success and leave you sorry when it’s all over. Then again, the beauty of one road trip’s ending is the chance to dream up another adventure.

Till next time, brother.