Photos by Tim Romano As far as I’m concerned, the best fishing road trips have very little to do with... 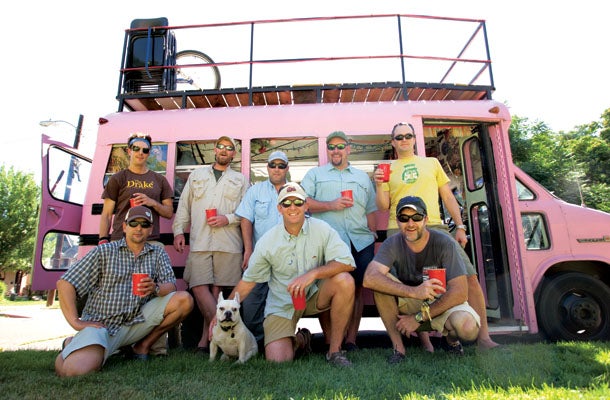 As far as I’m concerned, the best fishing road trips have very little to do with where you go, and everything to do with how–and with whom–you roll.

For example, my favorite trip ever was a one-day expedition in which seven buddies and I never left the Denver city limits. Instead, we plied the dirty backwaters of the South Platte River–all in the quest to catch common carp on flies.

It was how we did it that made for lasting memories. Riding in a rented hot pink, Hindu god-adorned school bus, we packed everything from rods, reels, and gaudy fly boxes to lawn chairs, a unicycle, a portable stereo, Mexican wrestling masks, and a cooler filled with ice-cold Cokes and PBR. We left all agendas behind and went where the gods (and our designated driver) told us to go.

Truth be told, we caught very few carp that day. My own–and only–moment in the sun happened after we’d snuck down the service road leading through one of Denver’s oldest cemeteries in order to park by a hidden honey hole. Having grown slightly impatient with the muddy water and fickle fish, I rigged a 13-foot, two-handed rod with a Babine double-egg fly, so I could at least practice some Spey moves in the slow current. I noticed a wake, fired a shot, made a few strips of the line, and soon hooked up. My landing a carp on an egg fly with a Spey rod soon became urban legend–even beyond the brotherhood of the pink bus–and remains my proudest catch to this day.

Sadly, I had to depart the pink-bus road trip early to get to the airport. I was off to Alaska to chase salmon. That proved to be another fun adventure, but I’m not lying when I say that I spent a good part of that trip fondly reminiscing about being with my buddies, riding the pink bus, and chasing carp back home. I still do.